The 87th General Session of the World Organisation for Animal Health (OIE) took place from 26-31 May at Maison de la Chimie in Paris, France. The event was attended by 900 individuals, including Delegates from 182 Member Countries and observers and professionals from 71 individual organizations. 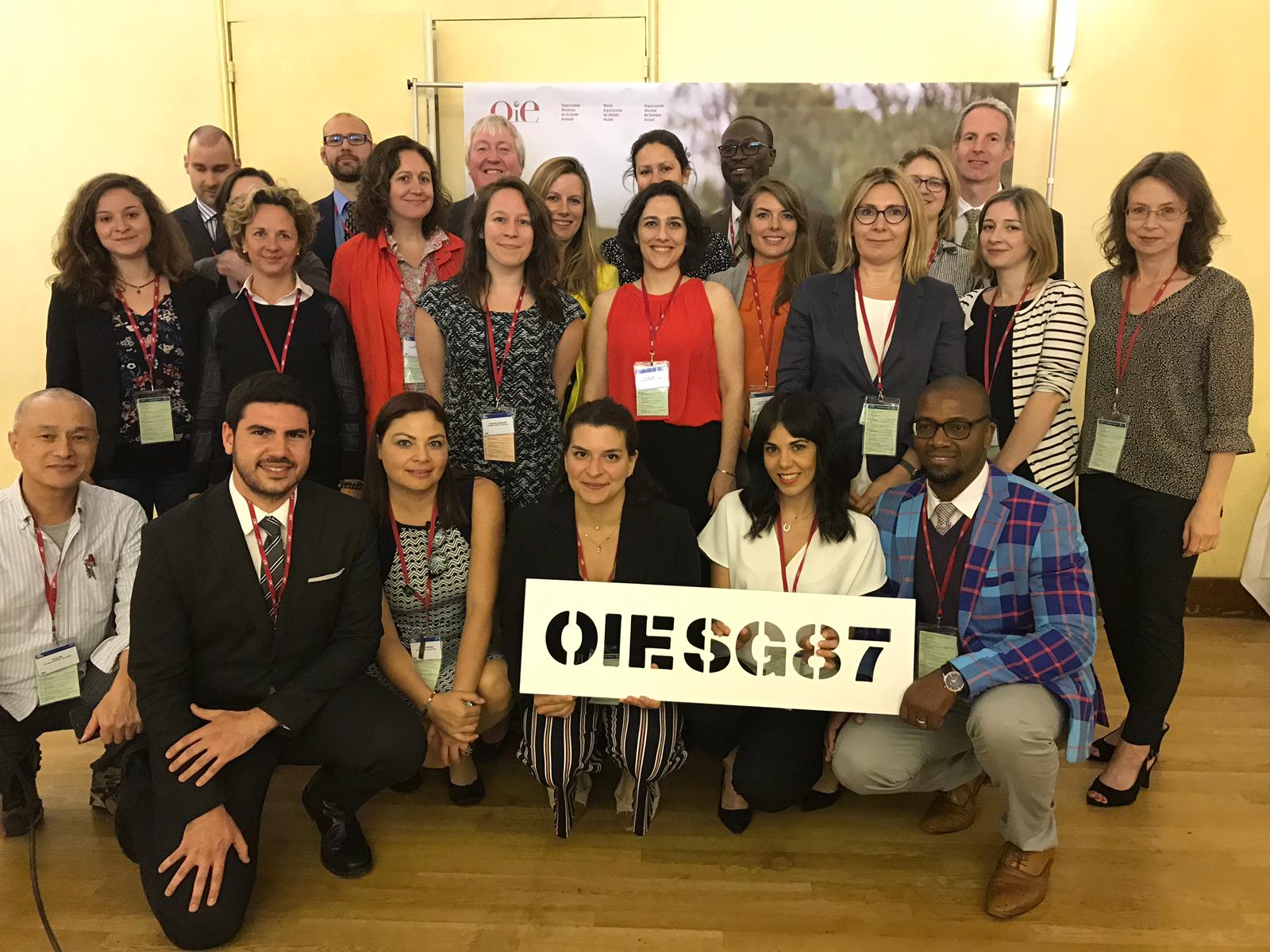 In 2018, ICFAW and the OIE agreed a Memorandum of Understanding, which aimed to strengthen and formalize the two organizations’ partnership to improve animal welfare globally through the effective implementation of OIE animal welfare standards. This year’s session was important in that it was the first year where ICFAW members attended the session as a delegation with official standing at the OIE.

ICFAW members observed the proceedings and the adoption of new resolutions, as well as attended Regional Commissions meetings. They also engaged in conversations with OIE members and delegates about the importance of the implementation of animal welfare standards.

ICFAW now has specialized working groups for each region recognized by the OIE (the Americas, Europe, the Middle East, Africa, and Asia, Far East and Oceania). The ICFAW Americas regional working group was able to meet with the OIE Regional Commission representative for the Americas to discuss the possibility of implementing the Americas Regional Animal Welfare Strategy, which was passed in 2012. This meeting was a positive step towards future collaboration with the OIE Regional Commissions.

During the OIE plenary sessions, several important issues were covered, such as the “impact of external factors in the Veterinary Services”. Challenges of the future were addressed including climate change and conflicts, as well as how the OIE is preparing to face those hurdles. The global animal health situation was discussed, with a particular emphasis on African Swine Fever (ASF) and the launch of the global initiative to control the disease. The spread of ASF is a major animal welfare issue as it is resulting in the culling of hundreds of thousands of pigs, in most cases without any regard for welfare or humane practices. The OIE assumed leadership on the ASF outbreak and will work in collaboration with the Food and Agriculture Organization of the United Nations (FAO) to identify appropriate actions to manage the spread of ASF worldwide. 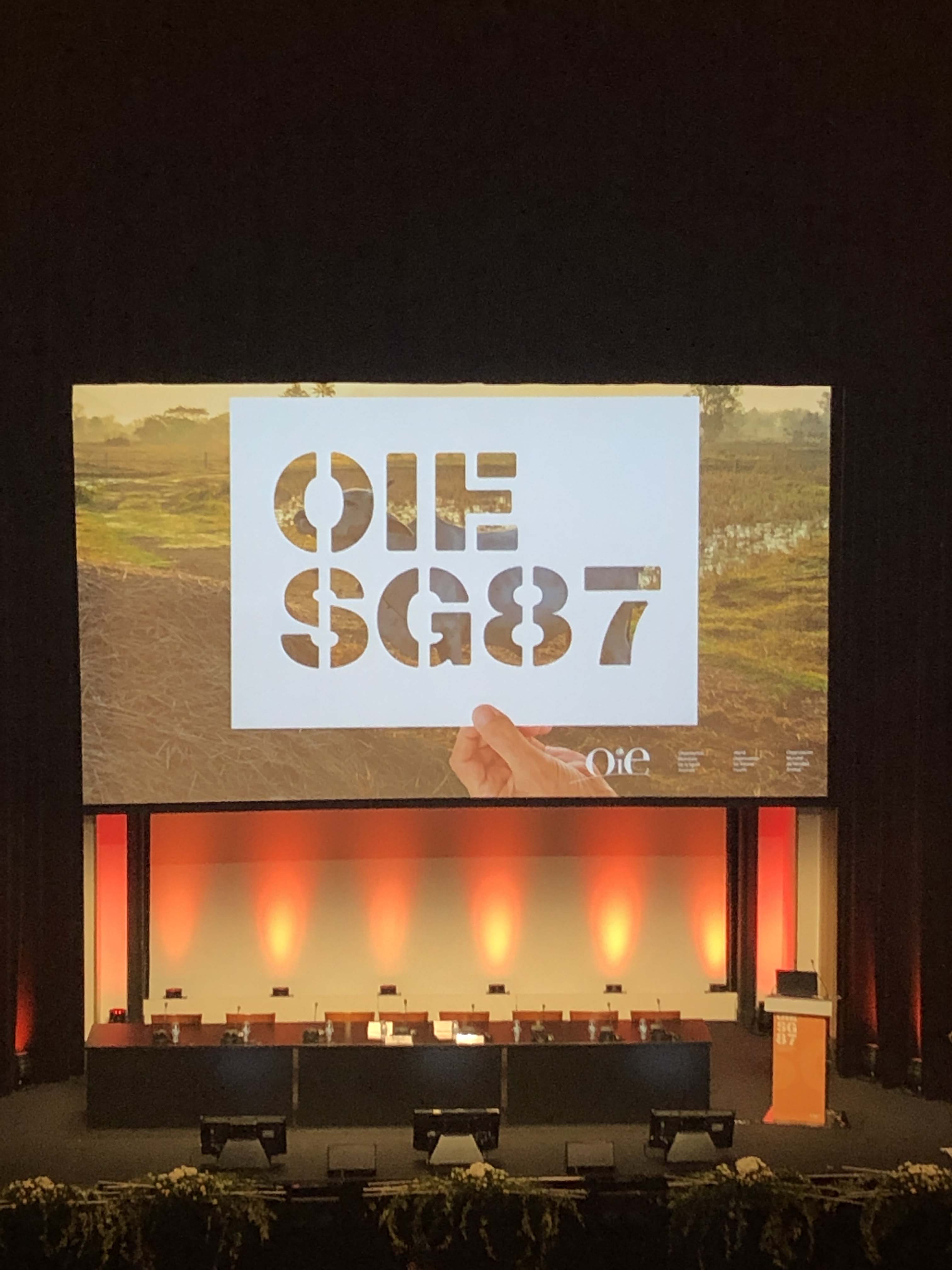 The United Arab Emirates was approved to host a new OIE Sub-Regional office in Abu Dhabi which will serve to “strengthen the cooperation with the OIE and among the Members of the subregion addressing their main concerns, such as zoonotic diseases and animal welfare.” This is a promising move forward in having a regional presence more focused on implementing the OIE welfare standards in the Middle East.

A total of 33 resolutions were adopted “including new and amended international standards aimed at protecting and improving animal health and welfare.”

The increase in reptile farming and the international export in reptiles and their products have brought up new welfare concerns for those species. The OIE addressed the welfare of reptiles, especially during killing, by adopting a new chapter on “killing of reptiles for their skins, meat and other products”. The EU Spoke in support of the chapter. The Central African Republic, on behalf of the 54 African States, requested that some changes be made to the wording in the chapter, to require that immediate unconsciousness precedes the killing of the animals and lasts until their death. The request was not granted, however. It is yet to be seen how the chapter might alleviate or pose additional welfare concerns for reptiles.

A new chapter on the welfare of egg laying hens has been in development for some time. During the Plenary Session on the Activities of the Terrestrial Animal Health Standards Commission, there was a discussion among member countries regarding the development of this new chapter. Delegates from several countries spoke in opposition to the contentious chapter and its most recent version circulated for member country comments by the OIE. They cited concerns with the proposed changes because they exclude the use of caged systems for laying hens. The United States, speaking on behalf of the 31 members of The Americas, called for changing the draft to include and allow all current production systems in the chapter. Colombia seconded this opinion, opposing the chapter on the basis that it excluded some housing types, and claiming that the country has been raising hens in all types of systems without any animal health issues. Japan called for flexibility and for the need to further consider cultural, economic, and social factors before implementing the changes. Etienne Bonbon, President of the Terrestrial Animal Health Standards Code Commission, responded by saying that comments were not currently being accepted on the text. However, the chapter will be subject to additional rounds of comments and subsequent revisions after September. It will be essential for animal protection groups to advocate, monitor and remain involved to ensure that the chapter effectively protects welfare and discourages caged systems. 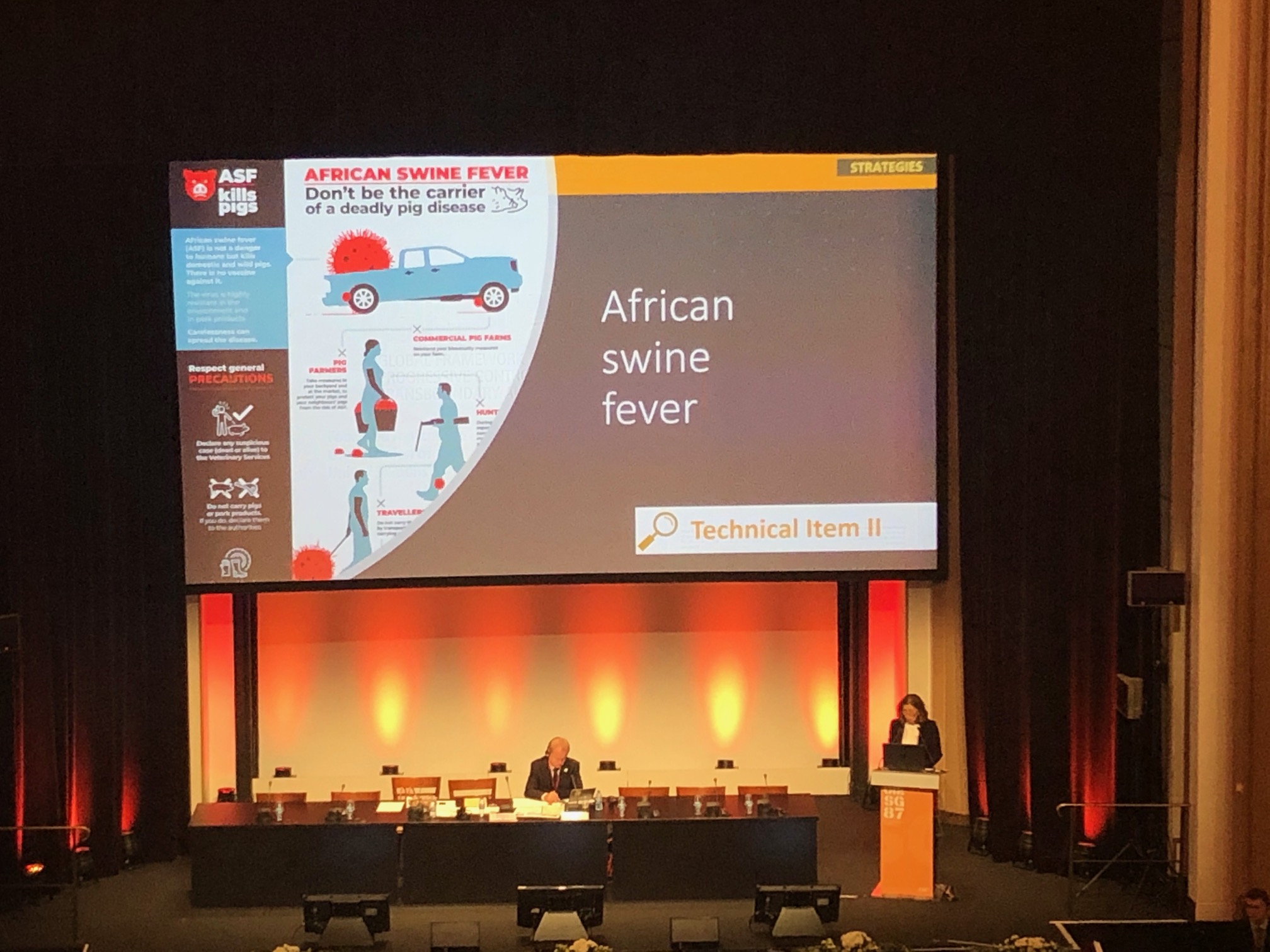 Although the OIE views and discusses issues of animal health and welfare primarily in economic terms and their contribution to human wellbeing, the OIE standards provide a powerful baseline for animal welfare to which 182 countries have agreed. This provides animal protection organizations with a powerful lever to push for better animal welfare in their own countries, especially those countries where there are as of yet no other legal protections for animals.

The presence of ICFAW at the OIE will continue to encourage the effective development and implementation of the OIE welfare standards to ensure that animal welfare remains, and hopefully becomes a more important part of the conversation.

All Resolutions adopted during the 87th OIE General Session will soon be available online.

More in this category: « A Global Pact for the Environment: Third Substantive Session The Animal Issues Thematic Cluster at the United Nations - Representing Animals within the Sustainable Development Agenda »
Twitter
back to top