The fourth High-Level Political Forum (HLPF) on Sustainable Development, under the auspices of the Economic and Social Council (ECOSOC), was held at the United Nations (UN) Headquarters in New York City from 9-18 July. The theme of the forum was “Empowering people and ensuring inclusiveness and equality" and progress on six of the 17 Sustainable Development Goals (SDGs) was reviewed during the forum.

Jessica Bridgers, Executive Director of World Animal Net (WAN), who has been one of the co-leaders of the Animal Issues Thematic Cluster (AITC) since its inception in 2017, attended the two-week event along with two other WAN representatives, Maha Bazzi (International Policy Intern) and Donna Hurry (Volunteer). WAN first attended the HLPF independently in 2017 and developed a guidance document to assist Animal Protection Organizations (APOs) and civil society organizations in engaging the HLPF.

The AITC, founded by Thinking Animals United, is a coalition of animal protection and conservation organizations from around the world advocating for the inclusion and consideration of animals within the Sustainable Development Agenda. The cluster operates under the umbrella of the NGO Major Group, one of nine Major Groups that are part of the Major Group and Other Stakeholders (MGoS) system set up by the UN for civil society participation.

The two additional co-leaders of the AITC, Adeline Lerambert from Born Free and Dr. Angela Wright from Compassion in World Farming also attended, as well as nearly a dozen other representatives from AITC member organizations including Darwin Animal Doctors, Cruelty Free International, Four Paws International, Animal People, A Well Fed World, Brooke, and the Donkey Sanctuary with the large turnout showcasing the drive and commitment of the developing cluster. 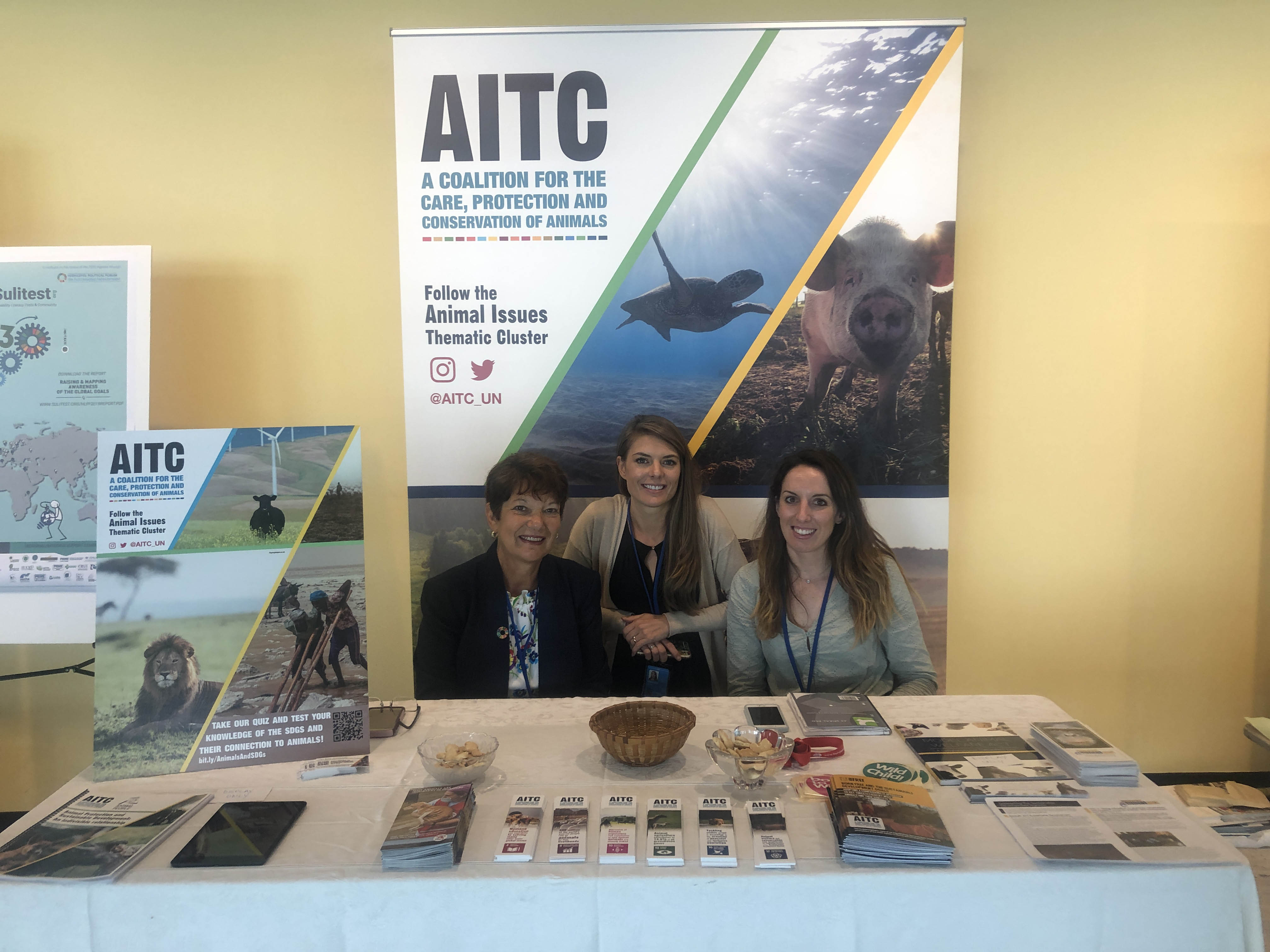 In preparation for the HLPF, the AITC worked tirelessly preparing position statements. Case studies were compiled and edited by Animal People, and combined with the AITC’s position statements into a booklet highlighting the indivisible links between the protection of animals and the SDGs. The booklets were showcased at an attractive exhibition booth hosted by the AITC throughout the event. At the booth HLPF participants, including distinguished international delegates, were invited to reflect about animal issues through an interactive quiz, engaging conversations with AITC members and accessible and thought-provoking reading materials.

During the HLPF, AITC members observed official general sessions and side events, kept track of discussions where the topics of animal protection and conservation were relevant, and monitored Member States’ positions on aspects related to environmental protection issues.

Although the connections between animals and the SDGs under review this year were less direct as with the SDGs that were reviewed in 2018 (such as SDG 15– Life on land or SDG 12– Sustainable Consumption and Production) and 2017 (such as SDG 2– Zero Hunger or SDG 3– Good Health and Well-Being), it was crucial for WAN and the AITC to bring those links to light. We strongly believe that achieving the Sustainable Development Agenda by 2030 will remain out of reach unless the protection of animals is acknowledged and leveraged as a cross-cutting issue that runs at the core of each and every SDG. For example:

All of the AITC’s detailed position statements can be accessed online and the full booklet can be downloaded here.

The key takeaways from this year’s HLPF were that the SDGs are far from being met and that urgent and concerted actions, backed with concrete initiatives for synergistic implementation, are long overdue. As summarized by IISD Reporting Services: “The global response to implementing the Sustainable Development Goals (SDGs) has not been ambitious enough, and a renewed commitment and accelerated action is needed to deliver the SDGs in time.”

Although all of the SDGs under review were given equal weight in the sessions and side events, there was broad and clear consensus that climate change is one of the most pressing issues of our time, and that SDG 13-Climate Action has to be addressed with unprecedented urgency. Representatives across the board, from Member States, to UN agencies and civil society agreed that climate change and its devastating impacts will undermine progress across all SDGs and that the global response to the climate crisis has not been sufficiently ambitious. There was however no broad consensus about solutions to tackling this crisis, apart from affirming the need to bring science, policy and statistics together for effective climate action implementation. Many of the proposals explored during sessions on the topic mentioned supporting organic farming, empowering small-scale farmers and producers, scaling up nature-based solutions as well as calling on individuals to reevaluate their own consumption patterns. Businesses, corporations, intensive producers and harmful subsidies, however, were disappointingly not brought up as the problematic drivers of the climate crisis.

What was most surprising was that in the dozens of sessions and side events dealing with climate and nature, no associations were drawn between ecosystem degradation and the protection of animals. Further, although issues of biodiversity loss and food security were central to many of the discussions, panelists and representatives on all levels neglected to address the massive impact of the intensive livestock industry on the destruction of the environment and its contribution to greenhouse gas emissions and climate change.

While the AITC’s engagement at this high-level event is a great accomplishment, it is evident that more work is needed in order for the issues it represents to be adopted and for its expertise to be harnessed by stakeholders on national, regional and international levels. The AITC therefore aims to continue to grow its role in the coming years, with a long-term goal of influencing the development of the next set of goals that will replace the SDGs in 2030, with the bold but realistic aim of having those goals explicitly incorporate animals.

The inclusion of animals in the agenda that succeeds the SDGs will be critical to mainstreaming the wellbeing of animals across all sectors and at all levels, from the local to international.

More in this category: « Integrating Animal Welfare into the World Organisation for Animal Health General Session in Paris Call to Join the Asia for Animals Coalition Network! »
Twitter
back to top