A brief policy round-up from the World Organisation for Animal Health (OIE’s) global animal welfare conference – to follow-up our initial blog on WAN’s attendance at this conference.

The World Organisation for Animal Health’s (OIE’s) 4th Global Animal Welfare Conference was a highly influential conference with over 430 participants representing more than 100 countries, culminating in the endorsement of a range of Recommendations aimed at furthering the improvement of animal welfare worldwide, and providing an opportunity for stakeholders to comment on the OIE’s brand new draft Global Animal Welfare Strategy. The proceedings were open and participative, enabling Animal Protection Organisations (APOs) to make a full and active contribution. WAN supported the International Coalition for Animal Welfare (ICFAW) – of which we are a member – in preparing briefings on conference issues, and moderating a pre-meeting of APOs. This ICFAW preparation helped proceedings enormously, enabling APOs to play a more impactful role than at previous conferences. All exchanges were well-informed, and respectful – even when opinions differed (which they did on occasions!).

ICFAW played a key role in preventing the inclusion of a number of additions that could have been detrimental to animal welfare interests. These were anticipated and APOs were briefed on the potential problem in advance. The most worrisome – and something that APOs across the world should beware of – were:

Initially, ICFAW members were extremely concerned to learn that the OIE had disbanded its Animal Welfare Working Group, which had done so much ground-breaking and positive work on the development of OIE AW standards. However, the OIE explained that this was part of a general review of its system of working groups. They would keep the specialist ad-hoc working groups to develop standards, but also proposed to establish another platform or forum to organise consultation with involved parties. This would include AP representation, as well as other AW stakeholders and academia. ICFAW is currently developing suggestions for this forum, and will submit nominations.

Other issues covered in the meeting included:

The OIE’s Press Release about the conference gives a brief overview of the event.

“One Welfare” was a theme reflected throughout the conference – stressing the many linkages between animal welfare, human welfare and the environment. It was agreed that the “One Welfare” approach has many advantages, particularly in terms of boosted profile, understanding and acceptance of AW; as well as inter-agency coordination and co-operation.

The other key themes which were carried through into Working Groups were:

There is more about these below.

The conference Presentations and Posters can be found here.

Dr Matthew Stone, the OIE Deputy Director “General International Standards and Science”, gave an interesting presentation of OIE progress since the previous AW conference, which can be accessed here. It was encouraging to learn that all 180 OIE Member States have now nominated AW Focal Points. It was also encouraging to note that several Member Countries had developed their animal welfare legislation using the OIE standards for reference (including Chile, Costa Rica and the United Arab Emirates) and that the new International Organisation for Standardisation (ISO) Technical Specification 34700 (Animal Welfare Management - General requirements and guidance for organisations in the food supply chain) is now available on-line.

The Draft Recommendations from the conference are here.
There was a brief consultation period on these, which closed on 22 December. ICFAW has submitted a number of suggested amendments.

The OIE also released its draft Global Animal Welfare Strategy at the conference, and ICFAW has provided comments on this. There is more on this below.

APOs took part in – and contributed to – all of the Working Groups:

The biggest challenge to the OIE standards and Regional AW Strategies (RAWS) is lack of implementation. Many countries across the world – developed as well as developing – have failed to implement the standards and RAWS they have agreed. Country and regional case studies in the plenary sessions highlighted what is needed here. For example, Malaysia had used the Asian RAWS as a starting point, from which they had developed a National AW Strategy (NAWS), introduced modern AW legislation, and significantly raised penalties. The UAE had also introduced legislation. The importance of leadership was stressed – strengthening AW governance, and the inclusion of AW in countries’ policies and laws, and making this a funded mandate.

It was stressed that collaborative partnerships are necessary for the development of AW, and it was agreed that the term “partners” was preferable to “stakeholders”. The need to secure funding sources was discussed, and WAN advocacy included a call for AW to be mainstreamed in development – along with collaborative partnerships with regional and international organisations. It was recognised that AW contributes to socio-economic development, and that higher AW standards are highly related to production sustainability and profitability. The need to include AW in bilateral trade agreements was mentioned, with the example of the EU-Chile trade agreement being cited. 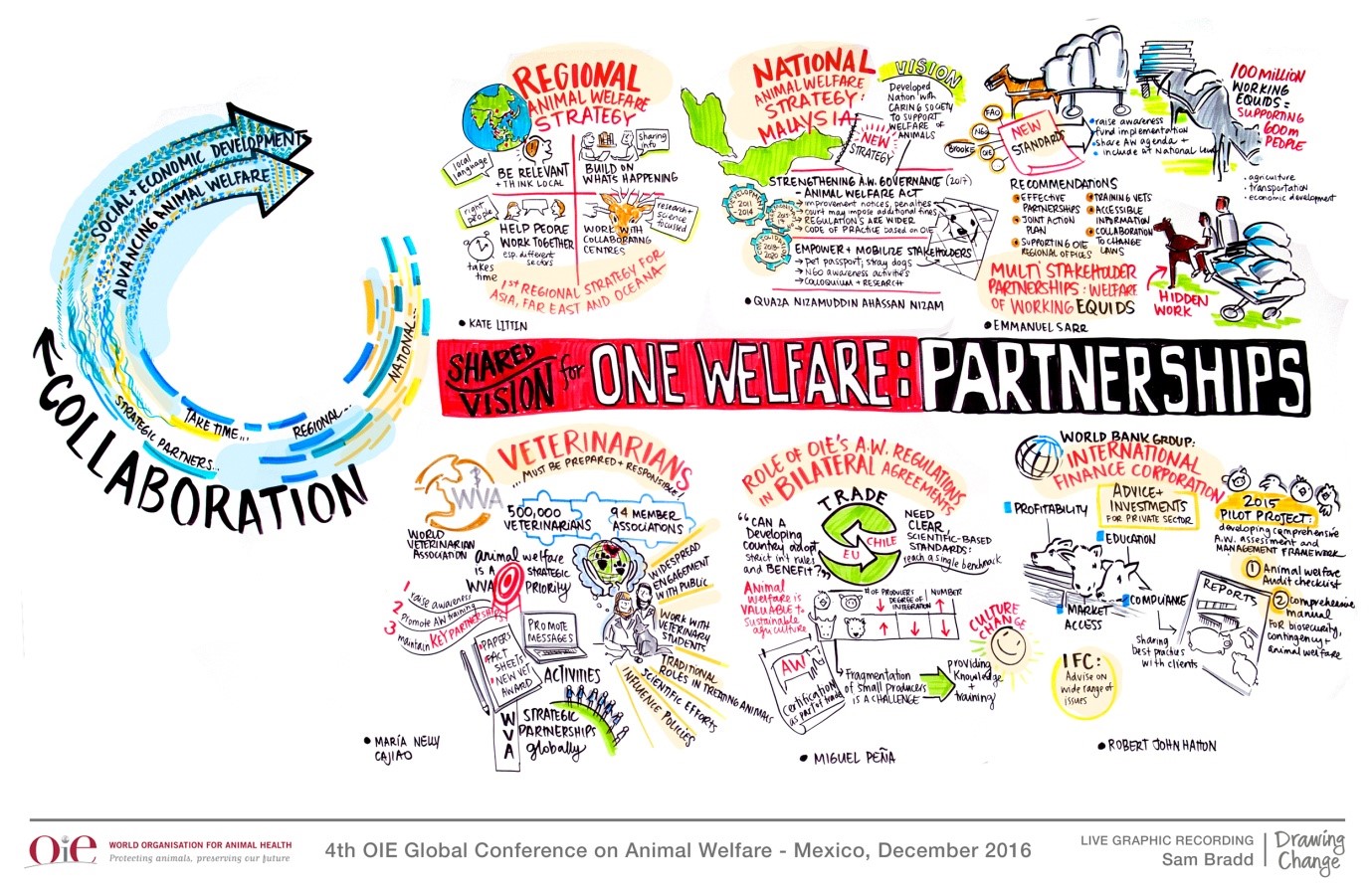 The potential benefits of new technologies to support animal welfare were considered, and the need to encourage such research and development. However, the need for ethical consideration was stressed, in particular to ensure that such technologies are not detrimental to animal welfare, and do not entrench systems that have little potential for delivering acceptable welfare outcomes.

This Working Group also considered implementation to be a key challenge. Countries should not have AW standards any lower than those of the OIE. A strong regulatory framework was also considered key. AW should be included in constitutions and national development plans, and mainstreamed in the work of regional and international organisations. However, it was pointed out that work could begin with educating farmers even before the agreement of the policy framework. 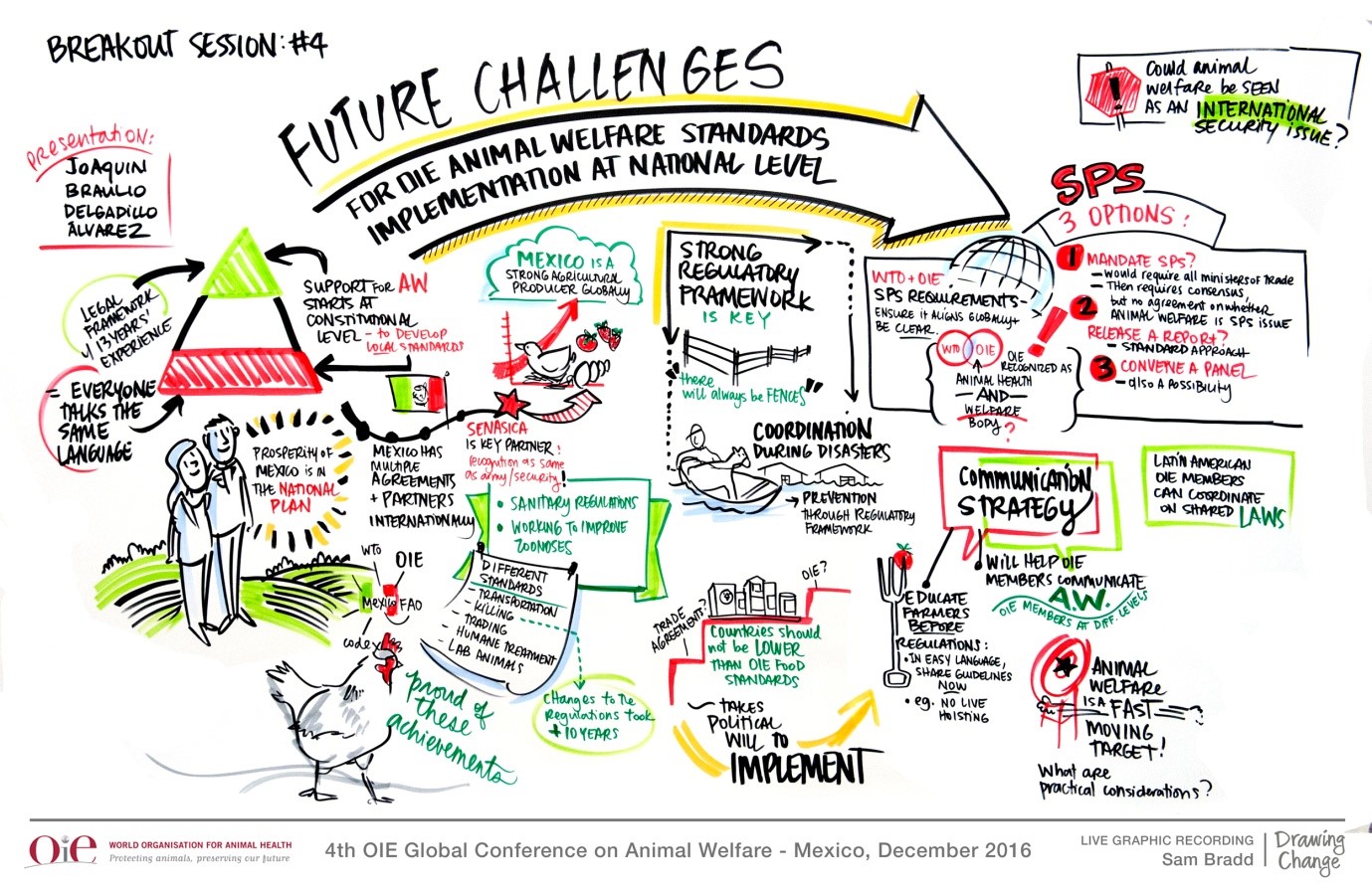 The Draft Global Strategy on Animal Welfare was presented to conference participants, and discussed during the event. Written comments were invited by 22nd December, and ICFAW submitted comments and suggestions. This strategy includes the establishment of the proposed new AW forum, to improve the opportunity for ongoing engagement among AW stakeholders, partners and technical experts in the OIE’s animal welfare work.

The strategy is based on the following four elements:

The texts of the strategy and the conference recommendations will be submitted to the World Assembly of Delegates for adoption at the 2017 General Session.

More in this category: « 2017: A Year of ACTion for Animals! Updates from COP22 in Marrakech, Morocco »
Twitter
back to top