Updates from COP22 in Marrakech, Morocco

At World Animal Net, one of our key initiatives is to help animal protection organizations around the world better understand and leverage international policy opportunities to improve the lives of animals. Unfortunately, WAN was unable to personally attend the recent Conference of the Parties to the United Nations Framework Convention on Climate Change (UNFCCC) meeting in Marrakech. However, we are pleased that our colleagues Tozie Zokufa of Humane Society International, the Pan African Animal Welfare Alliance, and member of WAN’s International Policy Forum and Caroline Wimberly of Brighter Green were kind enough to prepare reports of their experiences and work at the convention as well as outcomes and future directions for advocacy at the UNFCCC with the wider animal protection community. 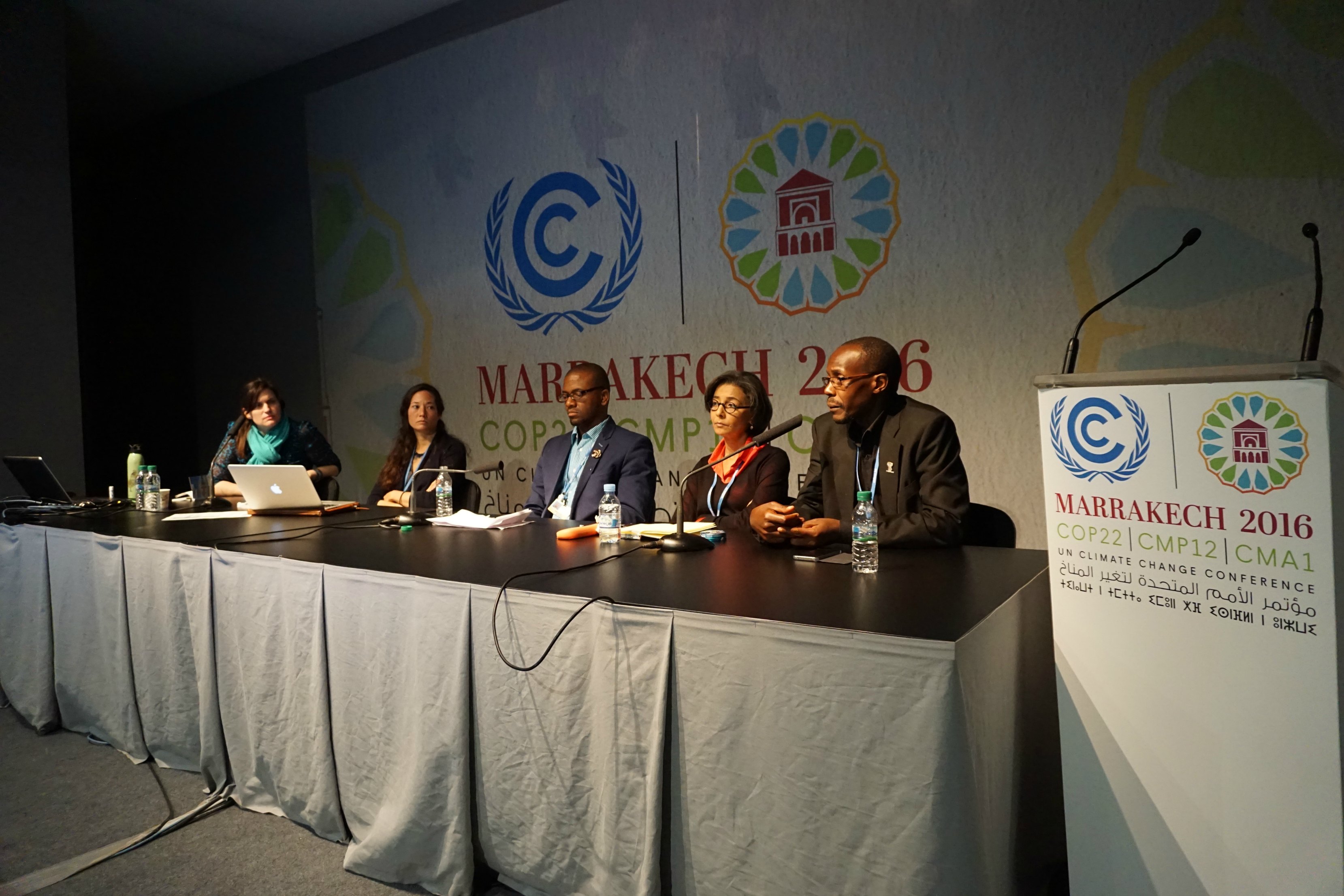 This year’s theme was ‘CoP of Action’ or ‘Implementation’ of the Paris Agreement. It was great to see talks/presentation around animal agriculture compared to my first CoP17 in Durban, South Africa held five years ago. What was not prominent though is the impact of climate change on the animals, i.e. animal welfare. It is well known that animal agriculture contributes significantly to climate change, at the same time animals are directly impacted by climate change, e.g. availability of feed and forages, heat stress, mortality, etc.

It is well documented and it came across clearly that climate change will negatively affect pasture composition and forage quality. When it comes to people, we will experience a greater migration, conflict for resources (especially water) and adverse impacts on human health. Animals will experience new diseases, shortages of water and heat stress would contribute to increased mortality.

The Food and Agriculture Organization of the United Nations (FAO) has dubbed this year ‘The Year of the Pulses.’ It was however, unfortunate that only one or two dishes had legumes and/or pulses. Food was the ‘missing link’ when it comes to the debates, but questions were raised from the floor about how and what we consume, including wastage.

What and how we eat needs to be policy driven at high level (government level) and all relevant stakeholders need to be roped in. The next decade has been themed, “The Decade of Action on Nutrition”. We call on our leaders, academics, policy makers, corporates and parents to make climate smart food choices by eating and advocating for more diet diversification, especially those of plant based origin.

Though the recent UN climate change summit, more formally known as the Conference of the Parties (COP22) to the UNFCCC (United Nations Framework Convention on Climate Change) in Marrakech, Morocco was labelled the “COP of Action”, no official action materialized regarding animal agriculture, whose long shadow contributes at least 14.5% of anthropogenic greenhouse gas emissions (GHGs). The World Resources Institute reported that in 2009, the agriculture sector emitted 24% of all global GHGs, with animal-based food production contributing about two-thirds of the total sector.

A range of climate change adaptation solutions to agricultural emissions were discussed alongside the formal negotiations in side events and panels. But presenters mainly offered “solutions” that would maintain the unfortunate trend of producing animal products by means of CAFOs—concentrated animal feeding operations, or “factory farms.” Such systems treat billions of animals around the world as merely units of production instead of sentient beings, resulting in poor animal welfare (in addition to a number of other urgent environmental, social, and ethical problems).

Several non-governmental organization (NGO) representatives promoting animal welfare—and concerns with industrial animal agriculture—convened in Morocco in perhaps the most visible way yet at such a conference. Brighter Green’s Caroline Wimberly from New York, Pan African Animal Welfare Alliance’s & Humane Society International’s Tozie Zokufa from South Africa, and Amal el Bekri of RAPAD Maroc (Réseau Associatif pour la Protection Animale & le Développement Durable au Maroc/Association for the Protection of Animals in Sustainable Development Morocco), who is based in Marrakech, made a strong case for animal welfare to be considered and included in mitigation and adaptation strategies at two official side events (one in the blue zone, the official government conference space; and one in the green zone, the civil society space).

All three also appealed for all countries to consider sustainable and climate-smart diets, particularly the reduction or abstinence from animal protein to mitigate climate change, conserve natural resources, reduce pollution, protect and restore forests, reverse negative impacts on human health, free up land to grow food directly for human consumption, and afford animals around the world lives worth living.

The theme of both events was the state of animal agriculture post-Paris (COP21) and the Paris Agreement, designed to guide all countries’ actions to reduce GHGs and included Simone Lovera (Global Forest Coalition), Steve Itela (Africa Network for Animal Welfare), and Teresa Anderson (ActionAid) as panelists. Given the U.S. presidential election results and fruitless formal negotiations on agriculture at COP22 (a pattern that has been followed at recent climate summits), we were pleasantly surprised with good turnouts and conversation. We engaged in meaningful post-event discussions with individuals representing NGOs and governments from Ireland, Fiji, Uganda, Taiwan, Morocco, New Zealand, Ukraine, and more.

Amal el Bekri, Secretary General of RAPAD Maroc, and Ahmed Tazi, Deputy Secretary-General and co-founder of ADAN (Association de Défense des Animaux et de la Nature/Association for the Defense of Animals and Nature), based in Rabat, were instrumental in getting an exhibit space devoted entirely to animal welfare issues in the green zone for the full two weeks’ duration of COP22. The space was aptly called “Flora and Fauna, ” and included partner organizations Brighter Green (U.S.), ANAW (Africa Network for Animal Welfare), PAAWA (Pan African Animal Welfare Alliance), and World Animal Net (U.S.), among others (all the organizations that participated are listed here).

The green zone had several small, open seating areas, called Agoras, where groups or individuals could schedule speaking events and discussions on relevant topics related to each Agora’s theme. Themes included youth, gender, culture, etc. Amal and Ahmed led a unique town hall-style discussion on the topic of animal welfare (almost exclusively in Arabic and French) in the Agora Territoires during the second week of the conference. About twenty-five people were engaged in the town hall, with lively questions and discussion highlighting the importance of addressing religious text and practices related to animals.

In addition to the green zone exhibit, a blue zone exhibit space featuring Brighter Green and HSI (and the Abibimman Foundation, an NGO based in Ghana promoting sustainable livelihoods and development in rural areas, including access to cleaner cookstoves) displayed a looping video and policy materials by Brighter Green on the effects of industrial animal agriculture expansion in Brazil, China, India, and Ethiopia, as well as mega dairies across Asia. Outside of our own events, Caroline Wimberly brought up meat reduction as a mitigation and public health strategy at a U.S. Pavilion event on “smarter” agriculture (live stream link; question starts at 38:08 mark), which was not, sadly, directly addressed by panelists from USDA, USAID, Mars Inc., and the World Food Center at UC Davis.

Tozie Zokufa asked two different side event panels about their thoughts on lab-grown meat, and was encouraged by one panelist’s support of the concept. A few years ago, this idea might not have received any attention or endorsement at a climate change summit.

Brighter Green and Humane Society International have sought to host a side event on meat and animal agriculture’s significant role in climate change at each COP we’ve attended (since COP15 in Copenhagen). The data is clear on this point, yet not highlighted often enough. A 2014 study by the University of Cambridge and the University of Aberdeen published in Nature Climate Change found if current trends persist—more meat consumption leading to deforestation and intensification in the livestock sector—by 2050 there will be 120 billion farmed animals raised each year, and the agricultural sector will emit almost the entirety of allowable emissions to keep global temperatures under the target 2°C increase in the Paris Agreement.

Clearly, concerns about this set of issues is global, and effective collaboration is necessary to push party delegates to nail down a work program that includes diet change as an encouraged and/or incentivized action.

What is encouraging is that discourse on food, agriculture and climate change and what to do about the GHG, ethical (including animal welfare) and health realities is growing quickly and meat and other animal products are an important topic. For example, the U.K.-based Food Climate Research Network (FCRN) held a meeting with about 20 other NGOs on the need for consumption actions on food and meat to achieve the goals of the Paris Agreement in London during the first week of COP22. And the topic of the latest “Nobel dialogue”, held in Stockholm during the week in December when Nobel prizes are awarded, was all about food. Called “The Future of Food: Your Plate. Our Planet”, the dialogue even included a panel on whether the world can still eat meat.

There is urgent need for action on both production and consumption side. Not only diet change but also a contraction in the growth of the industry and policy measures to bring this about. We encourage individuals and organizations who work on or care about issues related to animal agriculture (including animal welfare) to attend future climate change meetings. We need to push the discourse and action forward and there’s more opportunity to do this now since awareness is growing and the realities of animal agriculture and issue of animal welfare is/are becoming more mainstream. The next meeting is in May 8-18 in Bonn, Germany. The next COP (23) is also in Bonn, Germany (hosting for the organizing country, Fiji) from November 6-17.

More in this category: « The OIE’s 4th Global Animal Welfare Conference: Policy Outcomes in a Nutshell Events to Watch 2017 »
Twitter
back to top