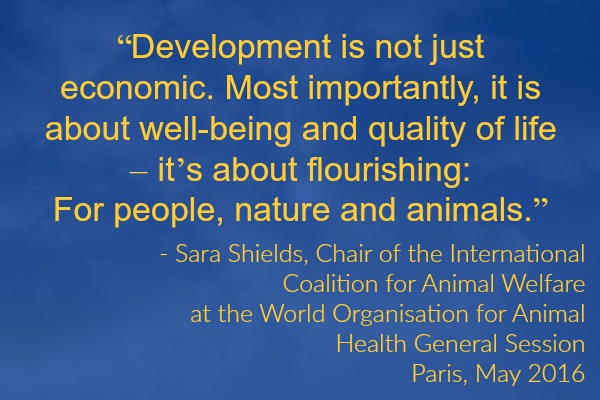 I attended reluctantly because this is never a gripping event (!) – consisting largely of long sessions on animal diseases, interspersed with set piece presentations on the work of a large selection of organisations working together with the OIE ... and just a brief session on animal welfare (which struggles to gain a quorum amongst members, even though this has been dubbed an OIE “priority”).
I decided to attend mainly because ICFAW was giving a presentation on Animal Welfare & Development – an issue which we have been working on for decades and I personally feel is vitally important (with the mainstreaming of animal welfare in development being long overdue). However, as it happens there were some aspects of interests to animal protection advocates in the General Session, which I will highlight briefly below.

But first the ICFAW presentation on Animal Welfare & Development... This was marred by the fact that the OIE did not allow us to announce this to delegates in the meeting, as had been done in previous years. However, use of e-mail invitations and the distribution of flyers did attract a sizeable audience (of around 140 OIE Delegates and others). The presentation itself was excellent – with a range of speakers from different ICFAW member organisations highlighting the important connection with development of various animal welfare issues: disaster management, stray dog control, animal agriculture (including aquaculture), working equids and wildlife. ICFAW’s Chair, Sara Shields of Humane Society International (HSI), rounded off by stressing that:

After the presentation, a number of delegates sought out the speakers to discuss the various issues they had presented. This is a far-reaching subject, which has the potential to make an enormous impact on the status of animal protection around the developing world, so it was wonderful to see it being highlighted in front of this influential audience.

The December 2015 Geneva conference on rabies control entitled,“Global elimination of dog-mediated rabies: The time is now!” had clearly created an impetus towards the elimination of this disease by 2030. Much of the discussion centred on the development of vaccine banks. With the support of donors, OIE vaccine banks made possible the delivery of 4,010,000 doses of rabies vaccine in Asia and Africa for the vaccination of dogs in 2015. The World Health Organization ordered 7,850,000 doses of rabies vaccine for dogs through the OIE vaccine bank; and several Member Countries were also able to purchase vaccines directly through these vaccine banks. However, there was little mention of Stray Dog Population Management (SDPM) in this context. The FAO mentioned the “tools” of “vaccination, dog bite prevention and responsible dog ownership”, but referred to SDPM as a “challenge”.

The animal protection community will need to watch to ensure that rabies campaigns do include SDPM as an integral component: after all, this is an agreed OIE international standard (see the WAN report on implementation of the OIE’s standard for more information on these standards).

A new international standard on working equines was passed.

The U.S. threatened to block adoption if provisions were not removed stating that mares should not be ridden three months before or after foaling and that horses should work a maximum of 6 hours per day. The code was passed, but on the understanding that there will be an opportunity to revise this further. Now suggested amendments will be submitted by OIE members and considered in future meetings. Animal protection organizations need to watch out for future U.S. attempts to weaken these!

There were also amendments to a number of existing standards. These included chapters on slaughter of animals (7.5.), killing of animals for disease control purposes (7.6.), broiler chicken welfare (7.10.) and dairy cattle welfare (7.11.).

An animal welfare resolution was passed.

Additional work is underway to prepare standards on pigs and laying hens.

There was also a request from Switzerland for a new chapter on the killing and slaughter of reptiles, which was endorsed by the EU. An expert panel had already been convened in 2013, so the science was available. The first step in this process was to include reptiles in the definition of animals in the Terrestrial Animal Health Code, and that was later incorporated as a change in the glossary passed by the General Assembly.

There were also two technical items – on the costs of animal diseases and antimicrobial resistance. These both impact on the way in which farmed animals and animals in aquaculture are kept, and I feel that the latter has the potential to be a “game changer” for factory farming systems.

So more of these in a future, dedicated blog. Watch this space!

Relevant documents should appear on the OIE website shortly.