On October 4th, World Animal Day, World Animal Net joined four other animal welfare non-governmental organizations (NGOs) - Eurogroup for Animals, Humane Society International, Compassion in World Farming, and the Royal Society for the Prevention of Cruelty to Animals (RSPCA) - in convening a workshop at the World Trade Organization’s (WTO’s) Annual Public Forum which had a special focus on "Trade 2030" and how trade can contribute to the implementation of the United Nations (UN) Sustainable Development Agenda. The workshop advocated for animal welfare to be addressed by the WTO in trade policy. Industrial animal agriculture is not only antithetical to the welfare of farmed animals, but also poses an obstacle to achieving the UN Sustainable Development Goals (SDGs). A report called "Achieving the Sustainable Development Goals: The Role of Animal Welfare in Trade Policy" was jointly produced for the event, and World Animal Net was thrilled to contribute to the section on the interlinkages between animal welfare and the SDGs. The report can be downloaded by clicking here. 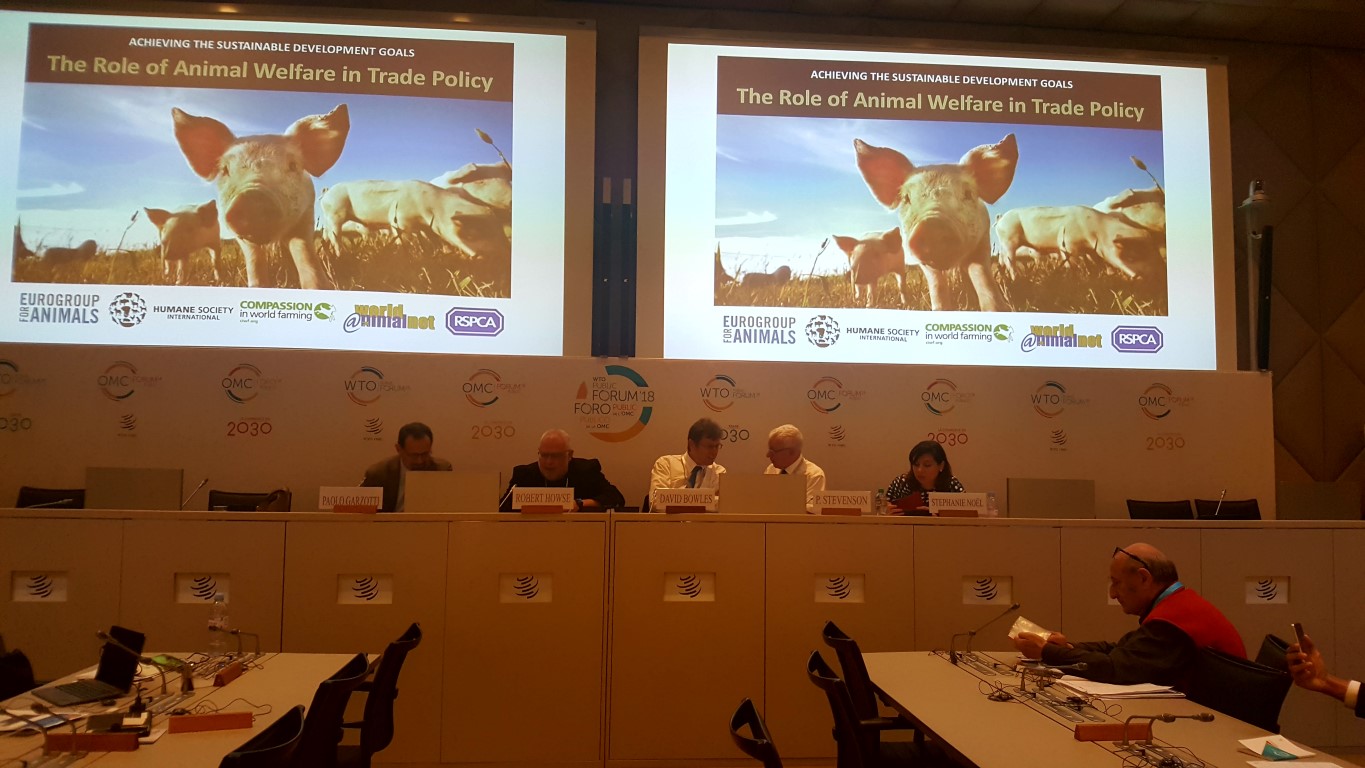 Previously, trade could not be restricted based on animal welfare. However, since the European Commission-Seals case, which bans seal products in the EU based on the pain it causes the animals, and the more recent US-Tuna II, there’s more opportunity to promote animal welfare through trade policy. Furthermore, using trade policy to favor systems which are more sustainable will help drive us toward our goal of reaching the UN SDGs.

The SDGs include ending hunger, ensuring good health and well being, ensuring sustainable and responsible consumption and production of resources, taking action to combat climate change, and preserving biodiversity. As 2030 approaches and the deadline for reaching those goals begins to loom, we, as a global community, need to take strong action to mitigate factory farming. At the opening of the workshop, Peter Stevenson, Chief Policy Officer at Compassion in World Farming, said that “the spread of factory farming strongly undermines the achievement of Sustainable Development Goals.”

Stevenson stressed that “industrial animal agriculture not only results in poor animal welfare but also will put several of the SDGs out of reach. Its dependence on feeding human-edible crops to animals undermines food security; its demand for cereals as animal feed has fueled the intensification of crop production which has led to biodiversity loss, soil degradation, and water pollution. Major changes are needed if food production and consumption are to meet the SDGs and treat animals as sentient beings.”

Now, more than ever, we have the opportunity to take steps to improve animal welfare policy while combatting climate change, antimicrobial resistance, and unsustainable consumption of resources. While working towards the SDGs is one reason to pursue these trade policies at the WTO,it is important to keep in mind that the goal of improving animal welfare has intrinsic value in and of itself. Professor Robert Howse of Yale noted that “Since the EC-Seal case, it is evident that countries may adopt trade restrictions based on anti-cruelty concerns, both to protect the animals and to express moral censure of these practices.”

Trade lawyer Stephanie Noël says that a measure based on animal welfare standards does not necessarily infringe on agreements already set out by the WTO. “It has to be judged on a case-by-case basis, and exceptions, such as public morals, should only be referred to if a prima facie violation of WTO rules has been found,” she said.

As shown in the recent Eurobarometer, farm animal welfare is valued strongly in the EU. The European Commission is considering policies which grant preference to products respecting EU standards as a tool to incentivize foreign producers to adhere to those standards.

However, there is hesitancy to take any firm steps. Instead, the EU is currently opting for a different tactic which favors global cooperation measures over court-level combat. Paolo Garzotti, the EU’s Deputy Permanent Representative to the WTO, said the WTO “prefer[s] to work with other trade partners rather than resort to measures – that could be challenged. We believe this will be more effective in the long term.”

However, considering that over 90% of EU citizens want imported products to respect EU-equivalent standards, we believe it is past time for the EU to take strong steps towards ensuring welfare for farmed animals and moving towards meeting the UN’s SDGs.

If you want more information about the event, please see Eurogroup for Animal’s firsthand report of the event here.