WAN Works Hard for Animals at the UN Environment Assembly!

The third session of the United Nations Environment Assembly (UNEA-3) took place from 4-6 December 2017 at the United Nations Office in Nairobi, Kenya, under the overall theme “Towards a Pollution-Free Planet”. Over 4,300 delegates participated in UNEA-3 and its related events, including 1,197 delegates from more than 170 Member States, 711 representatives of Major Groups and other stakeholders, and 94 intergovernmental organisations. 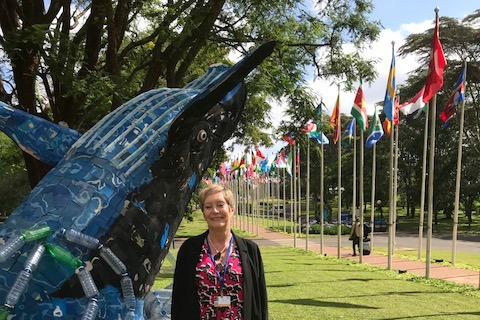 Several associated events took place in Nairobi in the week ahead of the Assembly: 27-28 November: The civil society-hosted Global Major Groups and Stakeholders Forum, which facilitates the participation of civil society in the Environment Assembly. 29 November - 1 December: The third open-ended meeting of the Committee of Permanent Representatives (Member States representatives based in Nairobi), to prepare for the UNEA and progress relevant documents.
2 - 3 December: The UN Global Science-Policy-Business Forum on the Environment, under the banner “Science for Green Solutions”. The aim of the UN Global Science-Policy-Business Forum on the Environment was to “identify and promote opportunities for green investment that are driven by advances in science and technology, empowering policies and innovative financing”.
3-6 December: A Sustainable Innovation Expo in the margins of the Assembly. 3 December: The Environment Management Group Nexus Dialogue on pollution, cities and health co-hosted by the United Nations Environment Management Group, UN Environment, the World Health Organization and the United Nations Human Settlements Programme.

This year's Assembly also launched interactive Leadership Dialogues, to provide participants with an opportunity for high-level engagement and discussion on how to achieve a pollution-free planet. Plus, there were many interesting side events staged in the civil society “Green Tent”, including presentations from the Lancet Commission on Pollution and Health, the Global Pact for the Environment, and informative training/information sessions from the Stakeholder Forum.

This was the first UNEA which World Animal Net (WAN) attended, and we concentrated mainly on the impact of industrial animal agriculture on pollution, but also addressed underlying structural and systemic issues. We were fortunate to have Dr. Nick Palmer of Compassion in World Farming (CIWF) as part of our delegation. Agriculture is a leading cause of pollution in many countries, particularly industrial animal agriculture and the crops grown to feed the industry. However, our advocacy was far from simple, with food production being a sensitive political issue, with powerful vested interests involved.

WAN is a member of two of the UN Major Groups – the NGO Major Group and the Women’s Major Group; and we were pleased to be able to collaborate with both of these, whereas Dr Palmer joined the Farmers Major Group at UNEA3. Together we were able to participate in and influence the positions of three (of the nine) Major Groups. We had already been active researching the issues, contributing to (and in some cases leading) work on Resolutions for the Women’s Major Group, and submitting our own comments on the draft Ministerial Document.

At the Major Groups and Stakeholders Forum, WAN also chaired a small but active working group under the NGO Major Group on structural and systemic issues, where the conclusions covered a number of important underlying issues (such as the need for a new development paradigm; and the impact of neoliberal policies, free-trade regimes and unfettered corporate power to pollute without internalising the costs).

However, combining and agreeing a position which takes account of all Major Groups and other recognised Stakeholders is a far from simple task, especially considering that one Major Group is for Business! Of course, it suits the purposes of policymakers to shoe-horn interest groups into one merged – and, by definition, diluted – position. But such forced simplicity and consensus does nothing to reflect the many important and interlinked issues which are the political reality that has to be dealt with, rather than swept under the carpet.

WAN was also asked to deliver a position statement on behalf of the Women’s Major Group in a workshop of the Science, Policy, Business Forum on the subject of “Feeding the World Without Killing the Planet”. This was considered necessary to provide an alternative perspective, because the panel was heavily pro-business interests (including the International Fertiliser Industry Association, CropLife International - which promotes agricultural technologies such as pesticides and plant biotechnology - and sympathetic scientists), with no civil society representation. There is a copy of our intervention here.

Recommendations from both the Major Group and Stakeholder Forum, and the Science-Policy-Business Forum were meant to inform the work of the Assembly. However, whilst there was clear business influence, particularly in terms of support for business partnerships and so-called “technological solutions”, there was less evidence of civil society influence. The forced consensus, coupled with shrinking space for civil society engagement in meetings, meant that civil society’s participation was largely limited to set-piece statements. However, this is something that civil society has already started to tackle.

This press for greater influence and meaningful involvement must be continued. Whilst UNEA is a relatively new process, it is an important one strategically. Its influence will also continue to develop, as it is given greater voice and influence as the environmental pillar of sustainable development, and the strategic overview of a number of environmental conventions.

As regards “our” issues, it was a pity there were not more animal protection organisations present and engaged in the process. No doubt more could have been done with stronger concerted advocacy. Indeed, it was definitely the larger coalitions – for example, on plastics and pesticides – which made the maximum impact. However, we did manage to influence some wording of resolutions along the way, and were able to contribute to a Plenary Statement by the NGO Major Group – see here - which specifically bemoaned the lack of attention that had been given to agriculture and its major role in all forms of pollution.

We do hope that the subject of the next UNEA will be one that is of interest to animal protection organisations. The theme of “biodiversity” has been put forward, but no final decision has been taken yet. However, if it is chosen, we will need a strong and concerted animal protection movement, out in force! Taking our places in a number of Major Groups. But also preparing well in advance, with collaboration on targeted research and proactive advocacy.

WAN will pull together our learnings and experiences, to strengthen the movement’s future advocacy at UNEA 4. The date has already been set for this: 11 – 15 March 2019 in Nairobi.

During the closing plenary on Wednesday afternoon, UNEA-3 adopted a Ministerial Declaration “Towards a pollution free planet”, 11 resolutions submitted by Member States, calling for accelerated action and strengthened partnerships on pollution, and three decisions. These are now publicly accessible on the papersmart portal here.

Provisional agenda, date and venue of the fourth session of the United Nations Environment Assembly

More in this category: « An On-the-Ground Look at Progress Made at COP23 in Bonn, Germany A Successful 2017 for World Animal Net! »
Twitter
back to top