The final regional preparatory meeting of the UN’s 2017 High Level Political Forum (HLPF) took place in Addis Ababa from 17-19 May 2017, hosted by the UN’s Economic Commission for Africa. Being based in South Africa, I attended this on behalf of World Animal Net (WAN), after discovering that no other African Animal Protection Organisations (APOs) were planning to attend. 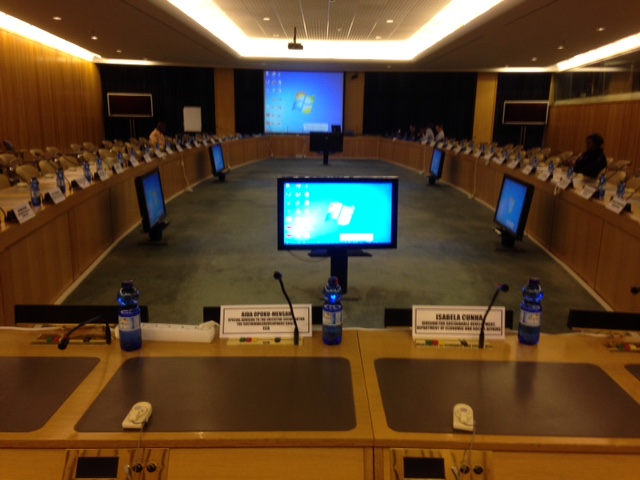 This meeting was in two parts. The first day was a “Preparatory and Capacity Development Workshop for Major Groups and other Stakeholders in the African Region”. This was followed by an official session over the next two days, which included Plenary Sessions and Parallel Working Group sessions. See below for some news on these.

The theme of the meetings was "Eradicating poverty and promoting prosperity in a changing world", and the set of Sustainable Development Goals (SDGs) reviewed in depth were the following:

Goal 1. End poverty in all its forms everywhere
Goal 2. End hunger, achieve food security and improved nutrition and promote sustainable agriculture
Goal 3. Ensure healthy lives and promote well-being for all at all ages
Goal 5. Achieve gender equality and empower all women and girls
Goal 9. Build resilient infrastructure, promote inclusive and sustainable industrialization and foster innovation
Goal 14. Conserve and sustainably use the oceans, seas and marine resources for sustainable development
Plus Goal 17 - Strengthen the means of implementation and revitalise the Global Partnership for Sustainable Development - that will be considered each year.

Participants included African Member States (all 54 were expected); representatives of major groups and other stakeholders (MGOS) including civil society, business and industry organisations, academia and research institutions; the African Union Commission; the African Development Bank; the NEPAD Planning and Coordinating Agency; Regional Economic Communities; United Nations and other international agencies and organisations; and Development Partners. You can learn more about the Major Groups and Other Stakeholders on the Sustainable Development Knowledge Platform.

Workshop for African Major Groups and other Stakeholders

The MGOS is a wide grouping, covering every UN Major Group plus other stakeholders. WAN is a member of the UN’s NGO Major Group, which had not been coordinated on this occasion. However, we managed to link up with other African NGOs present to formulate a common position. Without this, our voice would have been largely lost in the many diverse issues being raised. A copy of the African NGOs position is available here. This includes various animal protection concerns, covering areas such as:

Most importantly, African NGOs called for an “Integrated development paradigm which furthers the wellbeing of humans, nature and animals”. To my mind this is the most important aspect – as the current economic growth paradigm is a primary root cause of exploitation and suffering of animals.

We are now working together to develop an ongoing working collaboration between African NGOs, under the coordination of the UN NGO Major Group’s African representative, and sub-regional contacts. This will give African NGOs a stronger voice within the MGOS and the HLPF in the future.

We were also able to comment in the MGOS meeting itself, and to take part in, and influence, the MGOS’ working group on SDG2 – food security and sustainable agriculture, and to brief on SDG 14 on seas and oceans.

We have not yet seen the final version of the position statement from the MGOS, so do not know how many of our points have been taken forward in this.

Originally there was only space in the agenda of the official meeting for the MGOS to give its position. However, the South African delegation requested that the meeting hear the input of Major Groups, and so in the end NGOs were allowed to contribute in the plenary session (although only in connection with individual SDGs, as opposed to providing their full statement). The final official document is not yet available, but should be added to this UN ECA web page in due course. We are keeping fingers crossed that it will include some of our concerns.

Ministers made it clear that they were looking for unique African positions and evidence. They were clearly against international NGOs, which they said “often set up African bases so they can influence African policies based on their views from their Global North – rather than the values and views cherished by Africans”. This means it will be vital for African APOs to get involved in this work in the future for AP messages to be included, especially as animal protection is viewed as an issue being pushed by the Global North.

It is interesting to note that the UN Department of Economic and Social Affairs is particularly proud of the HLPF because of its innovative system of participation. Major groups can attend all official meetings, have access to all documents, and are able to intervene. This means that this is worthwhile and productive advocacy – especially as inclusion of AP issues in UN business is well overdue. As we said in a previous blog: “Animal Issues Woefully Underrepresented at the United Nations”.

The official Working Group on SDG 2 was jointly chaired by the FAO and the Zimbabwe Minister. The MGOS nominated the farmers’ groups (represented by Dyborn Chibonga, from the National Smallholder Farmers’ Association of Malawi) to present the MGOS working group’s position, and indeed they included many AP points in their presentation. These included opposition to monoculture, industrial animal farming, the need to develop grass-fed agriculture, to grow feed crops for human beings (not for animal feed) and the need to influence diets to eat locally-available foods and reduce meat consumption.

WAN was also able to contribute to this session. However, the Chairs were not very sympathetic, with the FAO speaking about developing both small-scale and industrial agriculture. There was also a lot of talk about the green revolution and new technologies.

There will be significant opportunities for APOs to influence the sustainable development agenda, if they are able to participate in their regional consultations and meetings. There are opportunities both in the global NGO Major Group and regional civil society consultations (such as the African MGOS and African NGO group), and in attending meetings. APOs with funding should consider supporting local APOs with good advocacy skills to attend wherever possible. For our part, WAN is ready to research and provide briefing (which would need to be amended to take account of regional concerns and perspectives).

The MGOS is a new and promising initiative, and during feedback sessions, they promised to work on providing more space for Major Groups to coordinate and present their own positions in the future, and for preparations to be well in advance in order for all constituents to be able to make an input.

Help us to Build the Voice for Animals at the UN!

The immediate need is for APOs to engage their governments on animal issues in the run up to July’s HLPF. See this blog for more information.

Then we need to prepare for next year’s HLPF – the theme of which will be: “Transformation towards sustainable and resilient societies”. The SDGs under review then will be 6, 7, 11, 12, 15 and the omnipresent 17. These cover:

So many AP concerns can be included here. Let’s all play our part in ensuring that the animals’ voices are heard!

For more information on advocacy for animals at the UN, see WAN blogs on:

More in this category: « WAN partners with RAPAD Morocco to Speak for Animals at UN Regional Meeting Reflections on the Animal Protection Movement »
Twitter
back to top