This Little Piggy: A Few Things Animal Advocates Should Know About Pigs

Chimpanzees. Elephants. Dolphins. Perhaps dogs. These are the animals that many people, including animal advocates, envision when thinking of the “smartest” animals. However, this list, accurate as it may be, is by no means inclusive. There are in fact other animals who can hold their own in scientists’ tests for intelligence and emotion, but who are all too often overlooked simply because of the role they play in human society. 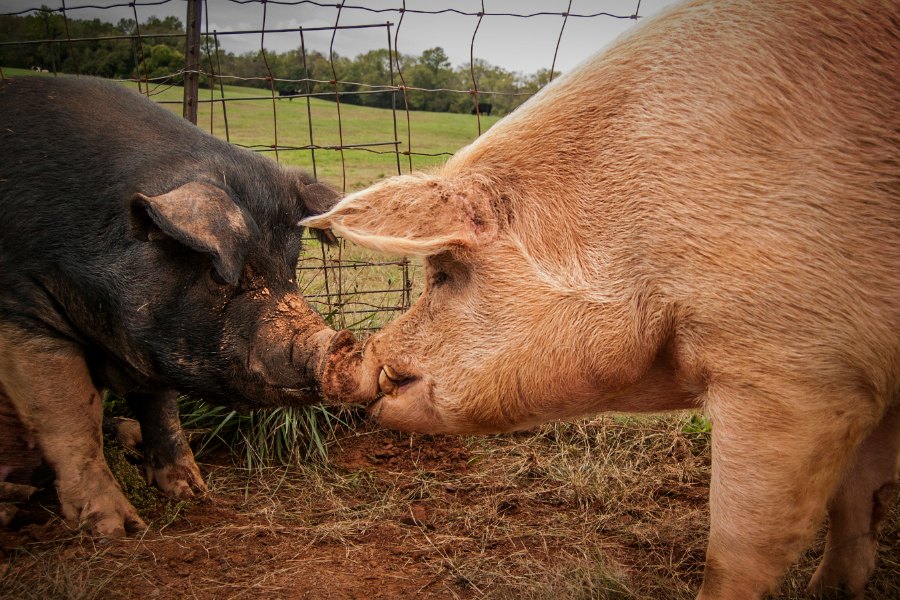 One such group of animals is the domestic pig. Not only are pigs studied less frequently by ethologists (animal behavior scientists) than the previously mentioned animals, but many of the studies that do focus on them are carried out in an agricultural production environment and are thus somewhat limited in what they really tell us about the nature of pigs. For this reason, researchers at Emory University, with funding from Farm Sanctuary, recently undertook a comprehensive research review, pulling together research on pig cognition, emotion, and personality, focusing on the more complex capacities of pigs, in order to assess what is known, and what should be explored in future. The entire article, called “Thinking Pigs: A Comparative Review of Cognition, Emotion, and Personality in Sus domesticus” is available for free download here.

As a quick introduction, cognition and sentience can be related to one another, but they are not the same. Cognition refers to the mental capacity of an animal. Sentience, on the other hand, can be defined as the capacity for consciousness, feelings, emotions, and perceptions. Cognitive abilities can influence the emotional perception of an animals, and both of these concepts were explored in the paper.

In terms of cognition, the researchers found that pigs were able to perform as well as many other animals at numerous tasks. Pigs, alongside dolphins and seals, could comprehend and distinguish between a frisbee, ball, and dumbbell, and between the actions of sitting, fetching, and jumping, and were even able to understand action-object combinations such as “fetch the frisbee.” Research also shows that pigs are particularly good with spatial information, which is understandable given their evolution as foraging animals. Pigs use their memory to either forage for food in places they know they have not foraged before, or to return to places that were more fruitful than others in the past.

When it came to more socially-oriented tasks like recognizing other pigs, along with many other animals, pigs show a preference for individuals they know over strangers. Like dogs, pigs were even able to discriminate between familiar and unfamiliar humans!

Another trait important to understanding cognition is the act of perspective, where an individual considers what another individual may be thinking and acts accordingly, sometimes with the intent to deceive that individual. Pigs, along with primates and some birds, exhibit behaviors indicative of perspective taking, such as following other pigs to food sources and trying to deceive other pigs in order to protect a food source.

Lastly, while pigs, along with dogs, have not successfully passed the mirror self-recognition test (read our thoughts on this test here), they have exhibited a related behavior indicative of “self agency” or the “ability to recognize actions caused by oneself,” a trait they may share with chimpanzees. One study that required the manipulation of a joystick to control a cursor on a screen and achieve a target found that all pigs in the study were able to complete the task, and that dogs did not do nearly as well as the pigs.

Pigs have been found to show “emotional contagion” or the ability to perceive and reflect the emotions of pigs around them, a trait shared with other socially complex animals such as dogs, wolves, and great apes. For example, one study trained pigs to anticipate either treats or punishment (in the form of social isolation) in response to different types of music. Pigs who knew what to anticipate when exposed to the appropriate musical cue often acted happy (wagging their tail, barking, and playing) or fearful (pinning their ears back, urinating, and defecating). When other pigs who had not heard the music before saw the reactions of these pigs, they tended to behave in a similar manner, becoming either happy or fearful depending on the reactions of their pen-mates. Mimicking the emotions of other individuals is considered to be one of the first hallmarks of empathy.

Lastly, pigs, like a number of other non-human animals, show behavioral and emotional characteristics that are persistent throughout the life of the individual and are indicative of discreet personality types among pigs. The components of these personality types have been described as aggression, sociability, and exploration, and are markedly similar to the traits of agreeableness, extraversion, and openness, which are considered to be components of human personality.

While the researchers believe that there is much work to be done in the way of understanding pig cognition and emotion, what is already known paints the picture of complex animals who can hold their own against the likes of often more celebrated dolphins, great apes, elephants and dogs. Animal advocates can use the information within the paper not only to inform their own perceptions of animal cognition and sentience, but also to better advocate for improved treatment of pigs.

The timing of the paper couldn’t be better, as the World Organisation for Animal Health’s Animal Welfare Working Group will be drafting their standards for pig welfare later this year.

What do you think? Did this paper change your perceptions of pigs? Will you use it to support your advocacy? Let us know in the comments!