From Bangladesh to Switzerland, and from kittens to lions, we are happy to welcome the following organizations to the World Animal Net Directory, and encourage you to read about each organization's work below. 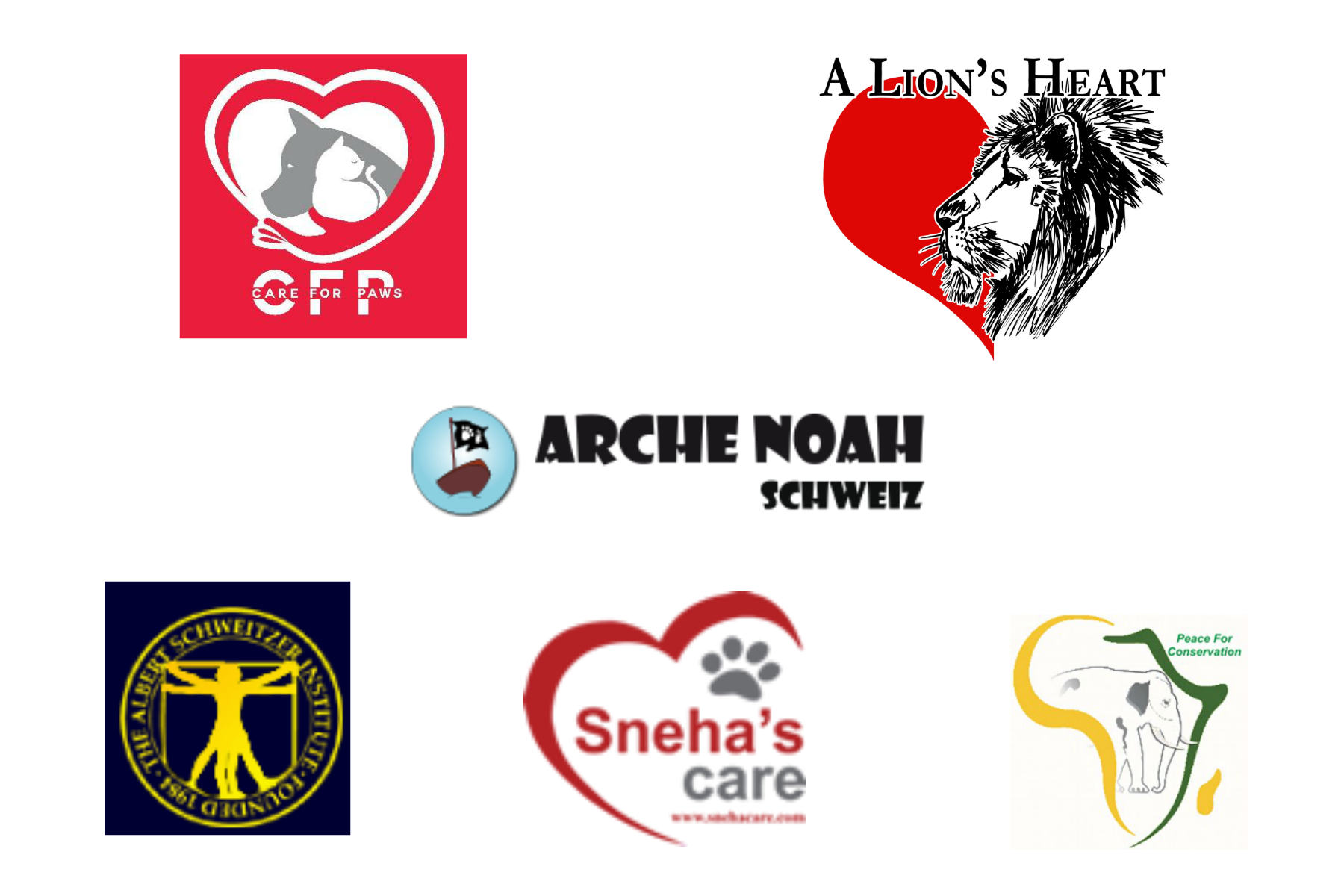 In 2003, the American Zoo and Aquarium Association estimated zoos worldwide to number over 10,000. Unfortunately, zoos and aquariums sometimes fail to provide quality care for their residents. When the animals of these institutions suffer, whether due to warfare or lack of proper veterinary care, A Lion’s Heart steps in to help. The organization’s mission page describes their goal as follows: “Our mission is to rescue and rehabilitate abandoned, abused, starving, and even war torn zoo animals throughout the world. We believe it is a moral responsibility to protect those imprisoned animals that are voiceless and cannot protect or provide for themselves.” Founded in March of 2016, this Alabama-based organization hit the ground running. You can find this organization in our directory: A Lion's Heart

At the moment, this zoo-focused group works diligently on its two largest projects. The first mission it ever undertook, and continues to work on to this day, involves improving the lot of horses under the control of the Djibouti National Police. The parties receiving these animals were unprepared to care for them. Volunteers work to treat the illnesses of the 25 surviving horses and prevent further infection via improved hygiene. The progress of this project can be found on A Lion’s Heart’s social media. Its second, and much larger project, involves rescuing the roughly 300 animals stranded at Yemen’s Taiz Zoological Gardens. A Lion’s Heart currently is working on providing food and improved housing to these animals. As Taiz houses the world’s largest population of the endangered Arabian Leopard, the work being done by A Lion’s Heart remains vital. Without the support of A Lion’s Heart, a beautiful species may teeter on the brink of extinction.

Based in the Dhaka, a city of roughly 7 million people, Care for Paws aims to save abused, neglected, or injured animals across Bangladesh’s capital. With such a densely populated city, this nearly two-year old operation has their work cut out for them. In addition to rescuing your typical strays, Care for Paws prides itself on taking the most dire of cases. You can view their Facebook, written in both English and Bengali, for some of their most recent rescue stories. When it has been brought back up, you can also view them at their home page.

While they have saved innumerable dogs since their founding in December of 2015, three of their most recent rescues came in the form of heavily injured dogs. Rescued on August 8th and passing away due to surgical complications on August 13th, Brady spent his time at the rescue in one of the organization's member's homes, showcasing the dedication of the volunteers at Care for Paws. In order to repair a leg injury caused by being hit by a car, Care for Paws worked tirelessly to raise the funds for Brady’s surgery. Though he passed away, much to the sadness of staff, funds raised for his care will be dedicated towards the next case undertaken by this rescue. A much more successful story exists for Sanam; placed up for adoption on August 14th, and rescued much earlier, this female dog has a stunning personality—one that may have been forever lost to the streets. Lastly, in straits just as dire as Brady, Dipo was rescued after a hit and run accident. Unlike the unfortunate dog mentioned earlier, Dipo remains with us and continues to fight the good fight. This handful of cases barely scratches the surface of what Care for Paws can do.

In addition to their work with stray animals, the organization works with the local community by hosting a variety of companion animal workshops, working to increase the public’s understanding of animal care and maintenance. In addition, the organization periodically hosts low-cost spay and neuter clinics.

If you wish to help Care for Paws continue their rescue efforts, please contact them via their Facebook page. You can also find them in our directory: Care for Paws.

Similar to its biblical namesake, Arch Noah Schweiz shelters animals of all shapes and sizes from harm, overpopulation, illness, and injury (and potentially torrential downpours). Based in Eschenbach, a Swiss municipality home to roughly 3500 people, this small shelter has worked to protect wild and domesticated animals since 2005; recently, Arche Noah Schweiz expanded its rescue efforts to include both Greece and the Ukraine as well. This versatile organization possesses the ability to care for dogs, cats, exotic reptiles, bats, hedgehogs, pigeons and even the occasional squirrel. In addition, its homepage aims to educate the public on both animal care and cruelty-free makeup brands, shops, and restaurants. If you can read German, or wish to muddle through via Google translate, please click this link.

Not only does Arche Noah Schweiz work with a wide variety of animals, the organization also devotes itself to a wide variety of causes. According to the issues they included when registering in WAN's Directory they support the following: promoting veganism, animal adoption and sheltering, wildlife rehabilitation, and spay and neuter programs. In addition to daily rescue efforts, which currently involves adopting out springtime kittens, the Swiss organization chips away at two larger projects. The first of these, Ban the Bang, aims to educate the public about the dangers and stress posed to animals by fireworks and other incendiary devices. The second requires the help of citizens around the world and their donations: Arche Noah Schweiz aims to increase its capacity with an expansion of its current facility. Updates on this project, and many others, can be found at the organization’s Facebook page.

Ninety-percent funded by its founder, Sneha Shrestha, this organization aims to turn the tides for the 30,000 stray dogs of Kathmandu. The remaining funding for this high-volume shelter stems from individual contributions. In just a year and a half, the volunteers of Sneha’s Care managed to assist over 4300 animals; this equates to roughly eight helped each day. Items provided to these animals include spaying and neutering, free vaccinations, and adoption facilitation. You can find the full list of offered services on WAN's Directory. To view the organization’s newest updates, along with words from their founder, please visit the organization’s homepage: Sneha's Care.

Jubilation erupted from their volunteers at the banning of the Gadhimai Festival in 2015. Sneha’s Care also supports the efforts of rescue groups across the country at both rallies and protests. Hungry to help more, Sneha aims to begin a large scale project in October of 2016: “Project 1000 Dogs Nepal”. In just ninety-three days, the organization aims to spay and neuter over 1000 strays; this equates to over 70 surgeries per week. In order to accomplish this gargantuan task, they now turn to the public for donations towards building an animal rescue vehicle. To view animals up for adoption, donate to the creation of this ambulance or follow along please visit their Facebook page.

Continuing the work of Nobel Prize winner Albert Schweitzer, the Schweitzer Institute works to alleviate suffering for all of the world’s inhabitants. While this humanitarian organization possesses many branches, such as those at Chapman and Quinnipiac Universities, we will focus solely on the animal-centric branch of East Sussex. According to the information supplied to WAN when registering their Directory entry, the group supports the following causes: promoting vegan and vegetarianism, ending the use of fur, ending the suffering of farm animals, better regulating animal transport laws, and putting a stop to animal experimentation. The group, founded in 1984, brings over thirty years of experience to the animal protection cause. In addition, the organization currently has consultative status at the UN Economic and Social Council (ECOSOC), where WAN also holds Special consultative status.

A quick peek at their Facebook will keep the interested abreast on all future and present projects; At the moment, the UK branch aims to develop a series of educational programs to bring the teachings of Albert Schweitzer to the rest of the globe. In addition to educational programs, this branch participates in a variety of animal rights’ protests; for example, they stood up against KFC and their factory farming process in late July of 2016. The largest gathering of Schweitzer devotees will arrive with the first Schweitzer Conference on September 24th of 2016. This educational event hopes to bring a clearer vision of Schweitzer and his philosophy to all attendees. One lecture focuses specifically on how the Nobel Prize winner’s thoughts can influence animal welfare. If you wish to attend this event you can buy tickets from the UK branch’s homepage.

From the snow-capped peaks of Kilimanjaro to the protected reserves of Serengeti, Tanzania happens to be a wild and untamed gem in Africa’s crown. In addition to holding three of Africa’s largest natural wonders, this country happens to be home to roughly 50 million people. This vast wilderness also hosts Peace for Conservation. Started roughly a year ago, this volunteer group hopes to improve the world by promoting environmental sustainability, wildlife conservation, and ecotourism. Included in their ecotourism packages are chances to learn new skills, veterinary internships, and opportunities to help safeguard wildlife on the ground level. Their WAN directory listing further reinforces their main causes while providing various contact information.

Their home page further expands their activities to include the following: education of various youth groups, habitat protection and restoration, humanitarian activities, protests against climate change and pollution, and support for conservation research. In terms of current events, the organization aims to help elephants with their anti-poaching initiative, which educates the public about the dangers of ivory hunting. All updates on this initiative can be viewed on the organization’s Facebook. You can also visit Peace for Conservation's website.

Please note that the inclusion of any group in the directory should not be taken as a recommendation of its aims, policies or methods.

More in this category: « World Rabies Day: Nominate a Rabies Champion Events We're Watching this September »
Twitter
back to top