On September 21, 2014, the historic People's Climate March brought some 400,000 people to the streets (with numerous marches in solidarity around the world) and WAN is proud to have been among them. Marchers aimed to show the United Nations that climate matters and to encourage the organization to take strong action on climate change at the 2014 Climate Summit, attended by heads of state. 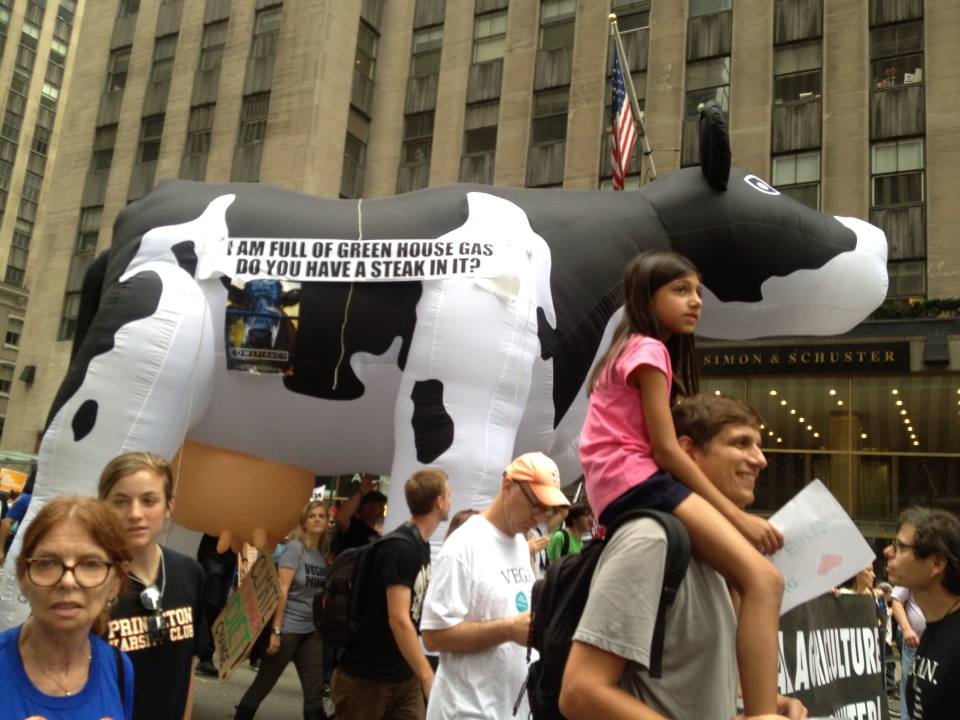 WAN looked to inform both viewers and march participants about the impact animal agriculture has on climate change, and the fact that reducing meat consumption is one of the easiest and most effective ways to combat climate change and improve the health of our environment. WAN leafleted and also brought a large inflatable cow emblazoned with the words "I am full of greenhouse gas, do you have steak in it?" which became a focal point of the dietary change march contingent.

Climate change cannot truly be mitigated without addressing the leading underlying cause.

We know from the Food and Agriculture Organization of the United Nations that the livestock sector, which produces meat and dairy products for our consumption, is responsible for more greenhouse gasses than the fuel from all forms of transportation combined.

We know from the Environmental Working Group that eating one burger has the same impact as driving 320 miles in a car.

We've already been warned by the United Nations Environment Program that the only way to avoid the worst impacts of climate change is to shift away from animal products in our diets.

This call to action is one of the easiest things we can do to counter climate change, alleviate the suffering of animals and protect people, and the planet.

For more information about how meat consumption damages the climate, visit:

Take Extinction Off Your Plate

The Summit that Snoozed? Climate-related disasters over five years have cost almost half a trillion dollars | Oxfam International

More in this category: « Featured Event: First Joint US/China Animal Law Forum Getting All Hands on Deck to Prevent Crimes Against Animals: Synopsis of the 3rd Annual Animal Abuse Summit in Maryland »
Twitter
back to top