“I don't know what your destiny will be, but one thing I do know: the only ones among you who will be really happy are those who have sought and found how to serve.”
Albert Schweitzer

Humane Education is a values-based education which encourages learners to explore and develop their own attitudes, life skills and approaches on a wide range of issues including social justice, citizenship, human relationships, the environment and the welfare of animals.

Humane Education can be defined as:

"A process that encourages an understanding of the need for compassion and respect for people, animals and the environment and recognises the interdependence of all living things."

Humane Education is already delivered in some countries, usually with an initial focus on compassionate human-animal interactions and widening into broader environmental and social concerns. Animal issues are an ideal way to introduce a humane education program to younger children – because they feel a natural affinity to, and empathy with, animals. But humane education goes wider than human-animal interactions, with learners eventually considering a wide range of ethical issues (animal, human and environmental) using resources and lesson plans designed to generate creative and critical thinking, and to assist each individual in tapping into their inbuilt ‘moral compass’. In its most effective form, humane education inspires future generations to take action to build a wiser, more compassionate and peaceful world for all – and in the process contributes significantly to individual self-worth and happiness.

This paper explores the potential role for humane education in building a happy and fulfilled society.

Humane Education is the building block of a humane and ethically responsible society, helping learners to:

In essence, it provides learners with firm moral values.

Humane Education can be a powerful force for good in the world, promoting empathy and compassion, a deep understanding of the needs of animals, other people and the environment, as well as the development of individual feelings of responsibility and self-worth. It not only instills a sense of compassion, integrity, and wisdom but also provides the knowledge and tools to act according to moral values in meaningful, far-reaching ways. All of these outcomes can contribute to the creation of more productive, altruistic and happy citizens; and a caring and peaceful society.

Read all about humane education at: http://worldanimal.net/our-programs/humane-education

On 9 July 2011, the UN General Assembly adopted a historic resolution which called on United Nations Member States to undertake steps that emphasize happiness and well-being in determining how to achieve and measure social and economic development. The resolution declares that “the pursuit of happiness is a fundamental human goal” and also embodies the spirit of the globally agreed targets known as the Millennium Development Goals (MDGs) (now merged with the new Sustainable Development Goals (SDGs))1.

Experience has shown that humane education can play a large role in improving happiness and well-being. The concept of happiness is here understood as both overall happiness – in terms of total well-being (people, animals, and the environment) - and individual happiness.

Humane education has the potential to develop learners socially, psychologically and ethically – as well as increasing compassion and empathy, and creating a feeling of interconnectedness with animals, nature and other people.

This probably seems somewhat quaint and far-fetched in the modern era (post-1800), where happiness has come to be associated largely with material conditions, especially income and consumption. However, beyond a low threshold where basic needs are met, increasing material gains have been found to have only a transient impact on happiness, and can bring their own traps (including afflictions and addictions)3. What is of greater – and lasting – importance is the deep happiness which comes from the inner peace developed from living a life which matters … compassionate and altruistic, and fulfilling our full potential. A life lived in harmony with nature and all life, instead of an ego-centered existence.

The World Happiness Report speaks of ‘eudaimonia’, which is sometimes translated as happiness, and often as ‘flourishing’, to convey the sense of deep and persistent well-being. This kind of virtue not only attends to the individual’s thriving but also to the community’s harmony. Eudaimonia is ultimately the end goal of human beings; the highest good. In the words of Bertrand Russell:

“The happiness that is genuinely satisfying is accompanied by the fullest exercise of our faculties and the fullest realisation of the world in which we live.”

In the great pre-modern traditions concerning happiness, whether Buddhism in the East, Aristotelianism in the West, or the great religious traditions, happiness is determined not by an individual’s material conditions (wealth, poverty, health, illness) but by the individual’s moral character. Aristotle spoke of virtue as the key to eudaimonia. This is why the World Happiness report advocates a return to ‘virtue ethics’ as one part of the strategy to raise happiness in society. Humane education is, in fact, the educational strategy for bringing forth ‘virtue ethics’.

Compassion and happiness seem to be intrinsically associated. Matthieu Ricard, the author of the book ‘Happiness – A Guide to Developing Life’s Most Important Skill’4 states:

“Compassion, the very act of feeling concern for other people’s well-being, appears to be one of the positive emotions, like joy and enthusiasm. This corroborates the research of psychologists showing that the most altruistic members of a population are also those who enjoy the highest sense of satisfaction in life.”

This claim is borne out by Maslow’s ‘hierarchy of needs’, which categorizes human motivations as follows: 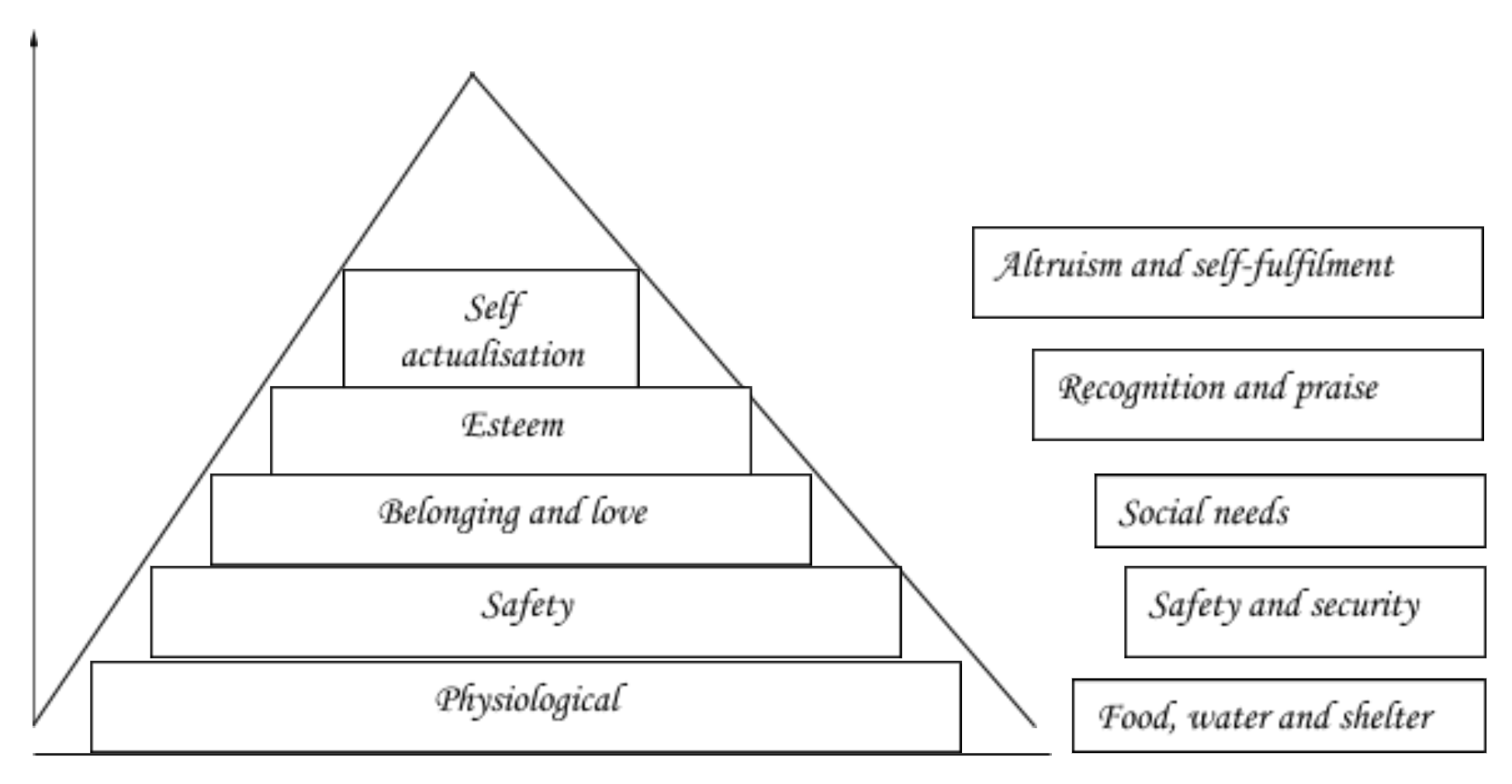 As can be seen, self-actualizing needs (wanting self-development and social progress for altruistic and ethical reasons) are the highest tier. Human social needs are also important and can be better met through the development of understanding and compassion for other humans. Humane education can help individuals to successfully meet both of these, and these lead in turn to the development of self-worth or self-esteem.

Humane education is the single biggest medium in our hands today to nurture and develop the gift of empathy and compassion in our children.

Empathy is the ability to understand and share the feelings of another being. When it is not well developed, we only consider our own personal interests, and the feeling of interconnectedness is absent. Evil can prevail when empathy is totally lacking. Compassion is similar, in that there is an understanding of another person or animal’s pain. However, with compassion, you have more of a desire to take action, as you are motivated to do something to relieve the pain and suffering. Compassion is an emotion which calls for action. The ultimate aim of humane education is the development of compassion, with empathy as an important step in this process.

There is a well-documented link between childhood cruelty to animals and later criminality, violence, and anti-social behavior; and humane education can break this cycle and replace it with one of compassion, empathy and personal responsibility5.

There is a section in World Animal Net’s humane education resource on the need for humane education, which includes paragraphs on both empathy and compassion. See: http://worldanimal.net/the-need-for-humane-education

Much of the teaching that takes place in schools is designed to impart facts and theories to learners. The methodology is largely ‘one-way communication’. This is reinforced by examinations, and the need to study given subjects and set responses in order to pass. This is simply assimilation of information, not true learning. True learning enables the pupils to critically analyze the information they receive and evaluate it under different points of view. The difference between learning and information acquisition is important in identifying and correcting biased and prejudiced views of the world. Knowledge is very different from accumulating unexamined information. Information is no more than knowing names and forms in the outside world (giving the ability to identify and analyze, memorize, and categorize). This denotes cognition and has to do with the brain (and more specifically the left hemisphere of the brain). It is just a step towards the acquisition of knowledge that promotes the development of intelligence and wisdom.

Intelligence derives from the Latin verb intelligere, to comprehend or perceive. It is an innate, knowing quality, which takes the individual beyond the mere ‘intellectual data processing’ level of thought. Psychology Today describes intelligence in these words: “Intelligence, however, was regarded as a mental faculty in its own right - a function of consciousness taking one beyond the facts as such, to suggest meaning or purpose, and determine the course of action to be taken.”6

Wisdom is the sum total of knowledge gained both from within and without, which enables us to determine the existential course of our journey through life. The Rosewood Report, in which philosophers and psychologists researched and considered wisdom summarised: “Practical wisdom consists in the capacities needed to make good judgments about what matters in life and to bring one’s actions into accordance, insofar as this is in one’s control.”7 Humane education is an essential part of the development of wisdom, as it helps learners to listen for and acknowledge ‘felt thoughts’ (or intuition), as well as facts, and enables them to access their own ‘moral compass’. Creative approaches support and develop ‘right brain’ activity, which perceives the big picture and recognizes our relationship with other humans and animals, and this marvelous planet, which sustains our life.

When facilitated effectively, humane education can help to develop ‘multiple intelligences’, which include emotional and interpersonal aspects as well as the cognitive aspects that are developed using more traditional teaching programmes. It develops the skills needed to manage emotions, resolve conflict non-violently, and to make just and responsible decisions. Furthermore, over time it helps to make ‘interconnectedness’ a reality, changing all future relationships.

In the words of Matthieu Ricard:

"It is only by the constant cultivation of wisdom and compassion that we can really become the guardians and inheritors of happiness."

The Preamble to the Constitution of the World Health Organisation 1946 states:

“Health is a state of complete physical, mental and social well-being and not merely the absence of disease and infirmity.”

Clearly, mental and social well-being are important components of health. Humane Education can help to develop these and in the process, improve societal health and well-being.

Humane Education has the potential to develop the motivation and mindset needed to achieve humane and sustainable development. It will also support the achievement of the proposed new UN Sustainable Development Goal (SDG) 16 on fostering peaceful and inclusive societies, particularly: 16.7: by 2020 provide information and education on a culture of non-violence.