The fourth session of the United Nations Environment Assembly (UNEA 4) took place from 11-15 March 2019 in Nairobi, Kenya, at the UN Offices at Nairobi (UNON), organised on the theme of “Innovative solutions for environmental challenges and sustainable consumption and production.” Almost 5,000 participants from 179 countries attended the Assembly and related events during the week, including five Heads of State and Government and 157 ministers and deputy ministers. The Assembly included plenary sessions, leadership dialogues and a multi-stakeholder dialogues. Other events that took place in conjunction with UNEA 4 included:

The Open-Ended Committee of Permanent Representatives (OECPR) convened from 4-8 March, with informal consultations on 9-10 March, to negotiate the Ministerial Declaration and resolutions to be adopted by UNEA 4. Negotiations on many of the draft resolutions and decisions continued in the UNEA Committee of the Whole (CoW). During the closing plenary on 15 March, delegates adopted a Ministerial Declaration, 23 resolutions and three decisions, addressing shared and emerging global environmental issues. A number of resolutions were significantly weakened during discussions, and three important resolutions were withdrawn after failing to reach agreement - covering deforestation and agricultural commodity supply chains, geoengineering and its governance, and plastic pollution.

WAN attended some of the drafting sessions for the resolution on deforestation and agricultural supply chains, and was shocked to note resistance from certain countries to this. The US and Brazil pushed to undermine its contents, and the African Group tried to deny the connection between deforestation and agriculture. It is past time to acknowledge that agricultural expansion is responsible for around 80% of deforestation. A strong resolution on that topic would have demonstrated political will and leadership in halting deforestation by 2020 – a target which has already been agreed under the 2030 Agenda and Aichi Target 5 (under the Convention on Biological Diversity). We were deeply disappointed by the lack of ambition and the obstruction in the negotiations on this issue which led to the resolution’s ultimate withdrawal. If we don’t commit and take actions to halt deforestation and forest degradation today, we will not be able to ensure food security tomorrow, because healthy ecosystems are the basis for sustainable agriculture.

UNEA-4 also adopted the UNEP Programme of Work and budget for the 2020-21 biennium and launched the Sixth Global Environment Outlook report.

Reports (daily and summary) and photos of UNEA by IISD Reporting Services are available here.

An official record of statements can be found here, including Major Groups and Stakeholders and NGOs (near the foot of the page).

The draft report of the CoW is available here.

The Ministerial Declaration, Resolutions and Decisions are available here.

It was wonderful to see a strong animal protection presence at UNEA 4. World Animal Net attended UNEA 4, along with a number of other animal protection organisations, including Compassion in World Farming (CIWF); Cruelty Free International; the African Network for Animal Welfare; RAPAD Morocco; and ProVeg International.

There were separate side events co-hosted by both WAN (see below) and Cruelty Free International, and CIWF spoke about sustainable food systems at a number of events and dialogues.

WAN and Cruelty Free International were both part of the drafting group for Major Groups and Stakeholders and NGOs.

WAN was involved in two side events at UNEA 4, these were: 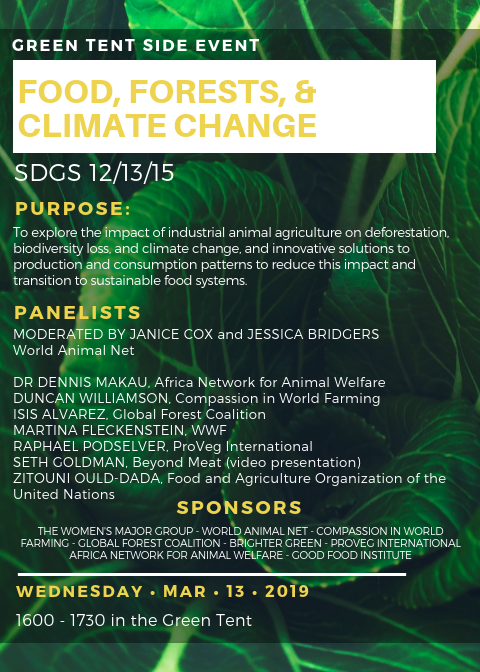 The goal of the of this side event was to explore the ways in which the industrial production of animals for food is putting the goal of sustainable consumption and production (Sustainable Development Goal 12) out of reach and how innovative solutions can revolutionise food systems to simultaneously improve food security, environmental protection, and animal welfare, while also halting biodiversity loss and reducing greenhouse gas emissions. This side event used insights from the private sector, intergovernmental organisations and NGOs to show how it is possible to reimagine the future of food. The event was co-sponsored by the Women's Major Group, World Animal Net, Compassion in World Farming, the Global Forest Coalition, Brighter Green, ProVeg International, Africa Network for Animal Welfare and the Good Food Institute. For more information, see here.

2. Global Pact for the Environment

This was a session to provide civil society with an overview on the Global Pact for the Environment, and an opportunity to discuss engagement and strategies in preparation for the second substantive session (18-20 March 2019). It was facilitated by the European Environmental Bureau, and I was a panel member speaking on member states positions and lobbying strategies. 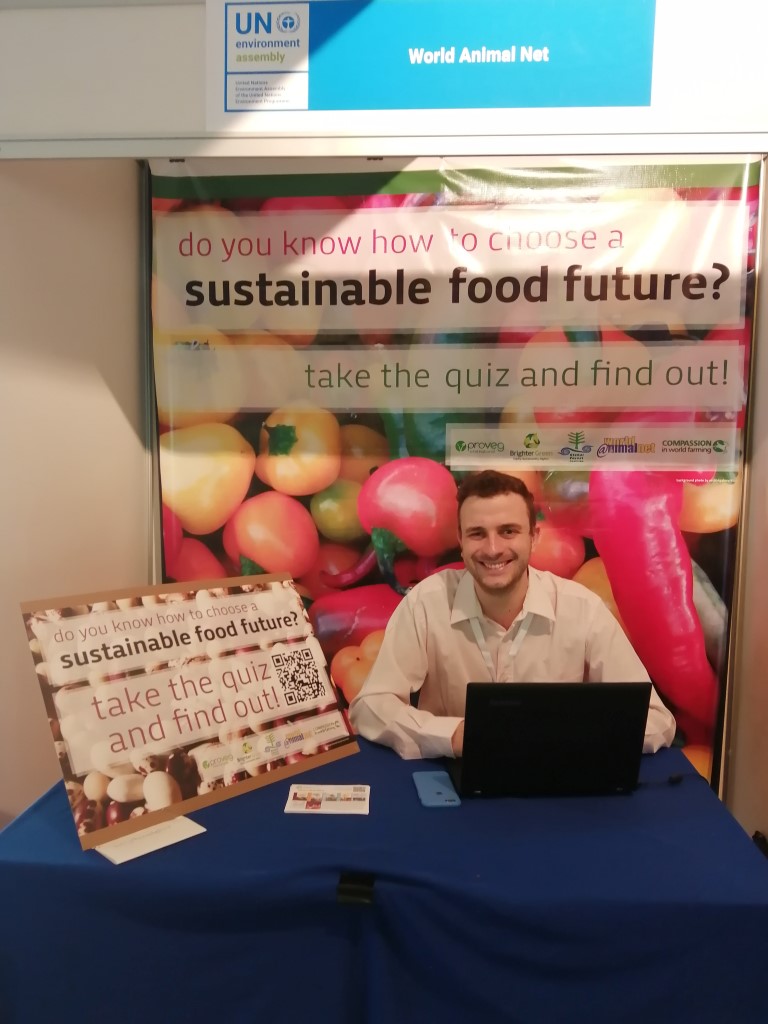 WAN also co-hosted a booth at UNEA 4, together with partners Brighter Green, CIWF, ProVeg International and the Global Forest Coalition. This included a quiz on how to choose a sustainable food future. We were so lucky with its location – being sited just across from the cafeteria, and with a light spotlighting it.

The Forum allows Major Groups and Stakeholders the opportunity to coordinate their input into both the OECPR and the Assembly itself.

The agenda of the Global Major Groups and Stakeholders Forum is here.

Within this Forum, I took part in the first interactive discussion on “Environmental Challenges related to Poverty, and Natural Resources Management”, which included issues such as sustainable food systems, food security, payment for environmental services, climate change and halting biodiversity loss. I also gave a presentation on “Industrial Animal Agriculture – Destroying the Planet”.

In addition to this, I had the pleasure of co-facilitating the Major Group and Stakeholders position paper on food security, along with Wali Haider, the co-facilitator of the Farmers Major Group. We prepared the first draft, and then made adjustments for further comments and suggestions. This was agreed by all Major Groups and Stakeholders, except Business and Industry (who usually take separate positions on issues).

We also took part in drafting the Recommendations of the NGO Major Group to the eighth Global Major Groups and Stakeholders Forum (GMGSF17) and UNEA 4. These cover many aspects of animal protection interest, including food systems, wildlife and ecosystems. Indeed, they mention animals 15 times, including six mentions of animal welfare. Wonderful! 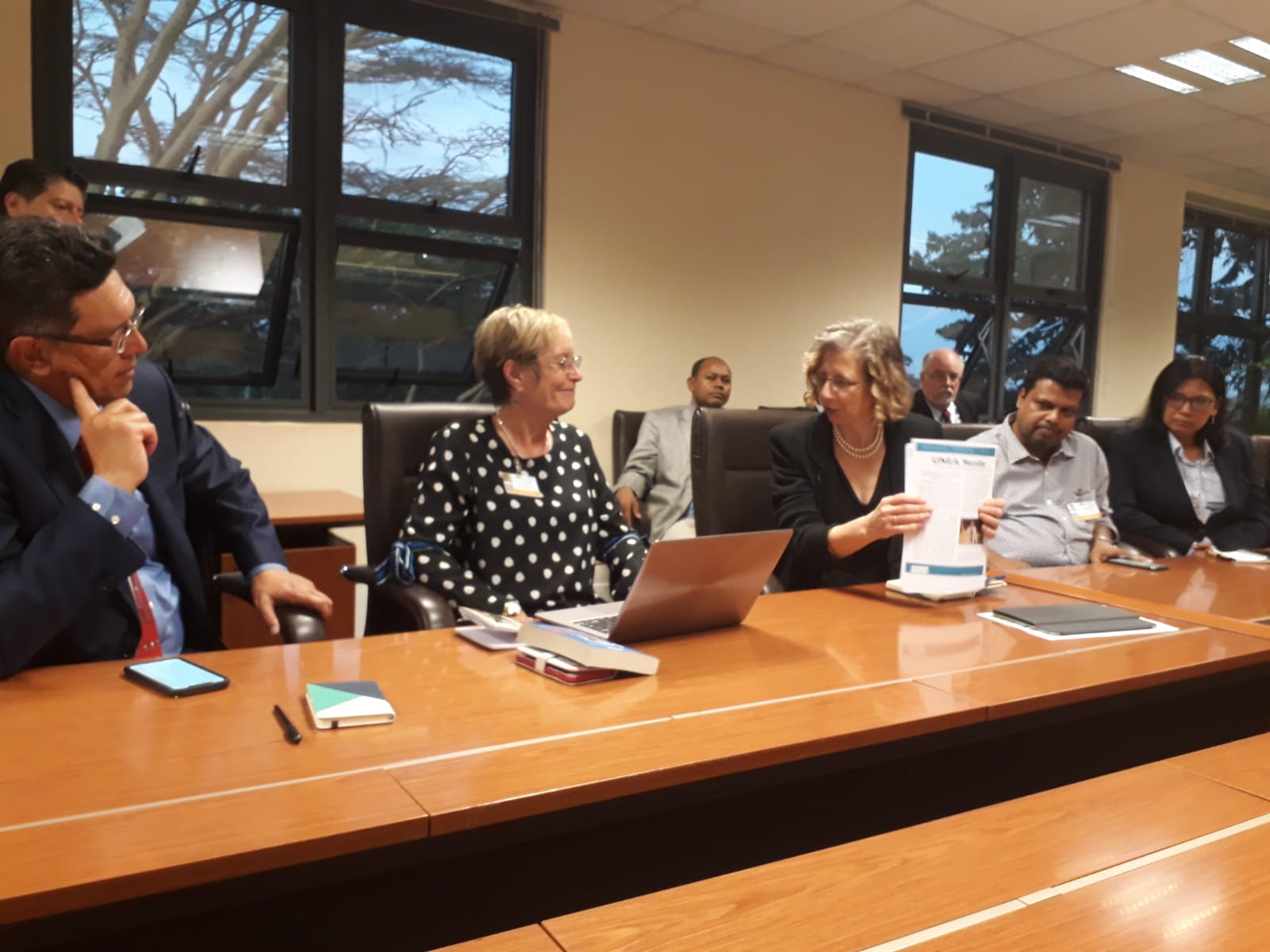 On Monday, March 11th 2019, I was part of a delegation of Major Group Leads and Regional Representatives to UN Environment who met with the newly-elected UN Environment Executive Director Inger Andersen. Ms. Andersen spoke in a personal capacity as she has not officially assumed her post as the new head of UN Environment. She did share her vision for UN Environment, underlining the need for a reassessment while raising the level of ambition and working effectively across the UN system. Ms. Andersen also responded to the concerns of the representatives in the room, which included:

Ms. Andersen committed to meet with the Major Groups and Regional Representatives going forward at future UN Environment Assemblies. She was intelligent and personable, and we look forward to a constructive relationship going forward.

UN Environment’s sixth Global Environment Outlook (2019) report was published in time for UNEA 4. This set a worrying scene, whereby environmental degradation is happening at a faster rate than was previously believed. The report states that “Urgent action at an unprecedented scale is necessary to arrest and reverse this situation, thereby protecting human and environmental health and maintaining the current and future integrity of global ecosystems. Key actions include reducing land degradation, biodiversity loss, and air, land and water pollution; improving water management and resource management; climate change mitigation and adaptation; resource efficiency; addressing decarbonization, decoupling and detoxification; and the prevention and management of risk and disasters.”

The report also states that our food systems are increasing pressure on local ecosystems and the global climate, and includes messages about reducing meat consumption and providing alternatives to conventional livestock production systems (with both plant-based meat alternatives and in-vitro meats mentioned).

The Full Report and a Summary for Policymakers are available for download.

At the time of UNEA 4, UNEP published an article co-written by Jessica Bridgers and me entitled: “Why is Animal Welfare Important for Sustainable Consumption and Production”. We hope that this research will also be useful going forward.

Date of Next UNEA