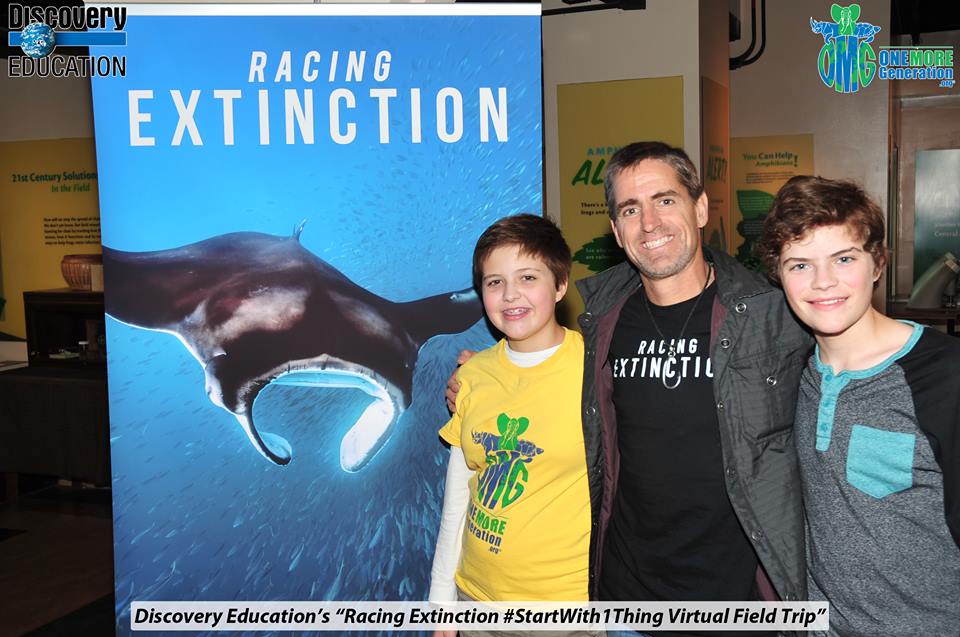 1. One More Generation (OMG) is a unique organization for a number of reasons, but chief among them is how OMG was founded. Can you tell us a little about how and why OMG was founded?

Carter and Olivia had received an adoption certificate for two cheetahs in South Africa from their Aunt back in 2008 as a gift. The following year when it was time to renew the annual adoption, Olivia asked the question “why do animals even need to be adopted?” Impressed with her thought process, I told her that unless there were agencies like the one we were supporting with our adoptions, there probably wouldn’t be any cheetahs in the wild for her kids to see. Olivia thought for a minute and then immediately started crying and she looked up at me and said “Daddy, I want to save cheetahs for my kids to see.” Surprised at her reaction and obvious sincerity, I immediately attempted to comfort her by telling her that she should relax, if she really wants to save cheetahs for her kids then someday when she grows up, she too could start her own organization and help save animals as well. Olivia took that answer as “Daddy said we are starting a company.” (Remember, she was seven at the time.)

Olivia ran to her brother Carter who was 8.5 at the time and told him that we were starting a company. The two of them started planning how they would save all endangered species and someday open the world’s largest animal sanctuary. As parents with fulltime jobs and no clue where to begin, we kept trying to side step the issue and their ever-growing ideas about how they were going to change the world. After several days the kids started to see through our attempts and now you could see the frustration and disappointment in their eyes as they started to realize we were not ready to start a company. As a last ditch effort to get out of the hole I had dug myself into, I told the kids they needed to prove to me that they were serious. I told them that they needed to study for 14 days straight about endangered species and what is causing animals to become extinct. I told them that if they could do this without us ever having to remind them then we would know they were serious and we would help them start their company. I continued by saying that if we had to remind them even once, then it would prove to us that they were just too young and we would wait 10 years and reevaluate their intentions then. I thought for sure they would never live up to their end of the bargain… boy was I wrong. That was six years ago and the kids have not slowed down at all.

2. How does OMG’s approach to advocacy differ from that of other organizations?

Carter and Olivia always wanted to create an organization that would educate their peers on various issues. As they learned about animals around the world that need help, they would go to their friends and they quickly realized that most of them were also unaware of the issues. As they started looking at ways they could make a positive impact, it became apparent that education was the missing link. They found that when they educated others on various issues, they would always find people interested in helping. The only thing holding them back up until that point was a lack of education about that particular subject.

Now OMG creates various educational outreach programs for all the initiatives they get involved in. Since starting OMG they created three main divisions within their organization. Animal Conservation, Environmental Conservation and Youth Empowerment. Each division's goal is to provide the necessary education and tools the audience needs to be able to make informed decisions on the subject and to help them find easy-to-implement ways to get involved.

The success of OMG can directly be contributed to the outreach programs Olivia and Carter have created and to the inspirational message they share with everyone “Anybody can make a difference… if we can, you can too”.

3. Why does OMG feel that youth empowerment is an important issue?

The youth of the world are unfortunately inheriting the mess previous generations created for them. Issues like overpopulation, climate change, plastic pollution and corporate greed are just a few of the problems they will have to learn how to solve. Today’s youth are more educated on worldly issues and realize better than any other generation that their actions have global implications and that their voices truly matter. Olivia and Carter see firsthand how their voices and actions are affecting change and they understand that with the proper education on a particular subject, today’s youth can solve anything.

4. What methods does OMG use to involve and empower youth in advocacy? What has been effective, and what has not?

The best way to involve and empower our youth is through education. As they say, you won’t care about something that you don’t know about. The more knowledge we can share with today’s youth on such issues as caring for animals and our environment, the better our chances are of solving some of these issues. Olivia and Carter travel all around the world sharing their work with others in an attempt to inspire as many youth (and adults) as possible and the results are amazing. The biggest hurdle they face is that they cannot be in more than one place at a time, and funding that might allow them to do even more outreach.

Olivia and Carter learned early on that to be effective with an audience, you need to allow the audience to find their own ways of being the solution. You are wasting your time if you’re trying to force-feed them a cookie-cutter solution to a problem. People (especially today’s youth) want to be creative and use their own strengths when tackling problems, no matter how grand they may seem.

5. What advice can OMG share with other organizations who are considering implementing youth empowerment or humane education programs in their own work?

“Just do it…” Youth Empowerment is probably one of the strongest tools we have in our arsenal and many leaders today still do not ‘get-it’. Today’s youth are compassionate and willing to work hard, let’s let them do exactly that instead of discarding them because of their age. Age discrimination is one of the biggest hurdles Olivia and Carter face and the sooner adults realize the potential of today’s youth, the sooner we can all work together to solve many of these issues.

6. What campaign is OMG working on now and how can others get involved?

The easiest way for others to get involved with Animal Conservation is to adopt an animal. That is how Olivia and Carter started OMG and how they learned about the need for so many species around the world. We recently launched our Orangutan Letter Writing Campaign and we are encouraging everyone to get involved by sending us their letters. We also ask that everyone share the program with any and all schools so we can get students from around the world involved in the campaign. You can learn more at the following link and even download template letters which we will hand-deliver to the President of Indonesia (http://onemoregeneration.org/2015/02/20/orangutan-letter-writing-campaign).

The easiest way for others to get involved with Environmental Conservation is to educate others to “Reduce their plastic consumption/usage”, to teach others the importance of “Precycling” and how that is even more important than recycling, and to look into participating in or coordinating a community ‘clean-up’ event. We also recommend that they tell teachers and local school officials to consider bringing in our award-winning Plastic and Recycling Awareness Curriculum. The weeklong program teaches the next generation of leaders how they too can be the solution to the issue of plastic pollution.

7. Is there anything that OMG would like to add?

At OMG we sincerely believe that “Anybody can make a difference… if we can, they can too” and that is the one thing we want readers to understand and realize. There are many issues that the next generation of leaders will have to deal with. Some seem at times insurmountable and others might even seem trivial, but one thing is for sure, together, we can affect change for the future. Carter and Olivia also ask that everyone please pledge to be kind to an animal and to help be the voice of the voiceless. There is no place on this planet for being cruel to each other or to any living species.