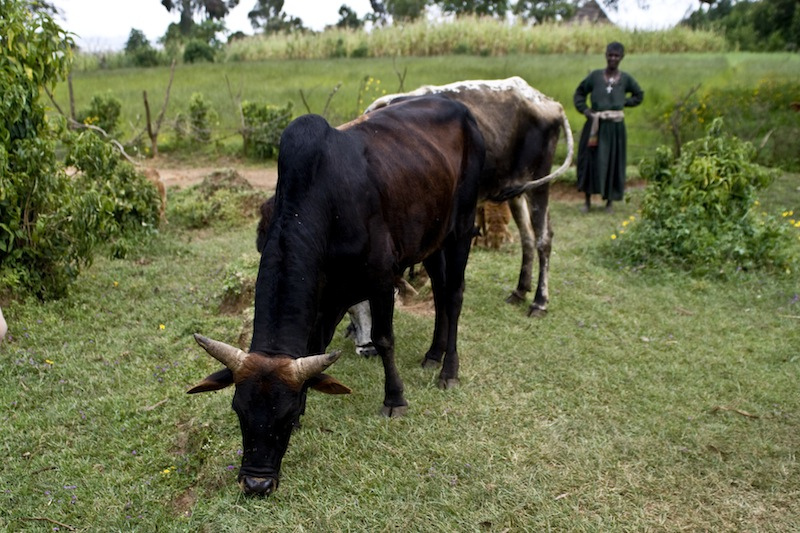 Many of the findings from this research were subsequently included in CIWF Trust’s 2002 report by Leah Garcés: ‘The Detrimental Impacts of Industrial Animal Agriculture - A case for humane and sustainable agriculture’. The detrimental impacts identified – and witnessed - affected major areas of development concern including: animal and human health; the environment, biodiversity and natural resources; and food security, livelihoods and poverty alleviation. Industrial systems also had inherent animal welfare problems, bringing unimaginable suffering to billions of farmed animals.

This work affected me personally, in a deep and abiding way. I had witnessed industrial animal farming in Central and Eastern Europe back in the 1990s, but working full-time on the problem and repeatedly looking at factory farms in different countries took its toll. I can still recall the heavy feeling in my stomach (and pain in my heart) as I looked into the eyes of sows in stalls or cows in cramped sheds or feedlots; or gazed upon squalling chickens crammed in cages or carpeting broiler sheds. The animals’ suffering was stark, and almost tangible.

To me, the cruelty and injustice of using sentient beings in such systems was evident – a “no brainer” as they say today! When the full social, economic and environmental damage they wrought was documented and added into the picture, surely things would have to change?

Besides, in a development context, where rural communities are struggling to survive, feed themselves and find productive work, it simply does not make sense to introduce industrial systems which are high on investment, inputs, and low in labour? There is no magical ‘trickle-down’ effect from economic growth, big business will not feed the poor, and small farmers cannot compete with well-healed corporations (who pay nothing for all the external impacts of their operations).

I was further shocked and horrified to witness how such cruel systems could be promoted and supported by international development organisations from the global north, when they were already known to be unsustainable, and to have such detrimental impacts. This feeling was further strengthened during the following year which was spent on related advocacy, including relationships with major international development organisations. Most recognised the problems, but there was a prevailing feeling that industrialisation was an inevitable part of the ‘development’ process, driven by consumer demand which would be met by business. The most they felt inclined to do was to examine ways of lessening its impacts. [Already they touted the need to ‘internalise the externalities’ (i.e. make businesses pay the full economic cost of their production), a theory which has remained such for these 15 years. In any event, how could anybody put a full cost on the suffering born by the animals?]

On the other hand, there was little change in the policy advice that development organisations gave to developing countries, whose national, regional and continental policies on agricultural development still tend to focus on the growth - and often intensification - of animal agriculture and aquaculture. Furthermore, I witnessed European governments attending intensive livestock trade fairs in ‘developing’ countries to help promote their own country’s products to fuel this industry.

Traditionally, development theory considered industrialisation to be the most relevant indicator of a country’s progress along the development path. This is probably not surprising, given a system with economic growth as the core measurement of a country’s progress. Agriculture was considered the hallmark of the first stage of development, while the degree of industrialisation was taken to be the indication of a developing economy. Fortunately, these traditional views are now changing, and in recent years, there has been an increasing focus on the wellbeing of people and their environments, as well as an increased realisation of the importance of small-scale farming to poverty alleviation, employment and local food security.

Leading development organisations have long been well aware of these problems. The FAO’s 2006 report on ‘Livestock’s Long Shadow’ was an in-depth assessment of the many significant impacts of the world’s livestock sector on the environment. It was deliberately given this title to bring attention to the very significant contribution of animal agriculture to climate change and air pollution, to land, soil and water degradation, and to the reduction of biodiversity. It concluded that the livestock sector was one of the top two or three most significant contributors to the most serious environmental problems, at every scale from local to global; describing the sector’s impact as “so serious that it needs to be addressed with urgency”, and specifically encouraging “decisive measures at the technical and political levels for mitigating such damage”.

However, there appears to be limited vision and political will to ‘urgently address’ these problems in an effective way. What value would “suitable institutional and policy frameworks, at local, national and international levels” be without the political will to push through meaningful change? Talk is still at the level of ‘mitigating impacts’, which is a woeful response. For years there have been studies on how to achieve “prices and fees that reflect the full economic and environmental costs” (including all externalities). Even if this were feasible, are the impacts something that we should even contemplate accepting? And can we wait while the economists and accountants spend even more time trying to calculate the incalculable?

One of the key messages of a 2013 report on ‘Smallholders, Food Security, and the Environment’, prepared for the International Fund for Agricultural Development (IFAD) and the United Nations Environment Programme (UNEP) under the guidance of senior management of UNEP’s World Conservation Monitoring Centre (UNEP-WCMC) was that “Growth in agricultural production to meet rising global needs using prevailing farming practices is unsustainable”.

This is a watershed moment which needs a new direction: A move away from the unsustainable, towards a more equitable, environmental, resource-efficient and kinder food future.

The approach I would like to suggest is based on the internationally accepted ‘3Rs’ (Russell and Burch’s 1959). These are the ethical principle applied in relation to the use of animals for science. They are equally applicable to the use of animals for food (indeed, the need for change is even more pressing in this area of animal use). Here are a few thoughts on this approach:

First we have to deal with our current unconscionable food waste. More than enough food is already produced to feed the anticipated world population in 2050 of 9.6 billion. The real challenge lies not so much in producing more but in wasting less, and ensuring a more equitable distribution of food and agricultural resources. This includes ensuring that more of the crops we grow end up in human stomachs, instead of to produce meat, dairy products and eggs, where only a fraction of the calories in feed given to livestock make their way into the animal products that we consume (with an average of 4 kcal of crop products being used to generate 1 kcal of animal products).

We need to influence consumption patterns. At the moment, people in developing countries view increased meat consumption as a hallmark of a developed lifestyle. They emulate the perceived opulence of citizens from the global north in their unhealthy and unsustainable eating patterns. Educational and marketing approaches are needed to address this – in both developed and developing countries. These could include ‘Eat Less Meat’ programmes, ‘Meat Free’ days, nutritional guidelines and advice, and public awareness about the severe health impacts of high-meat diets.

Reduction could also be supported by taxation (with sufficient tax levied on animal products to cover ‘externalities’ and to positively influence healthier food choices).

Investment in the development of cultured meat and vegetarian meat replacements, advice and promotion of vegetarian and vegan recipes and products. The use of crop calories and other non-meat solutions for food security programmes, including micronutrients for the most food insecure.

There needs to be a radical change to food and agricultural policies across the world if we are not to have an acute food crisis. Climate change related events are likely to intensify in the coming years, while rising temperatures are expected to reduce levels of agricultural productivity in large parts of the developing world. It is time to stop bandying around the term ‘sustainability’ and instead to work towards this, with a new focus and political will. Sustainability is not optional. We must introduce food consumption and production systems that deliver food security and good nutrition, while preserving the well‐being of future generations, and... a kinder life for the animals.

Photo credit: by Diana Prichard, used under CC BY 2.0