The Humane Education Trust (HET) was founded in 1998 specifically to bring humane education into classrooms throughout South Africa.

In 2000 its founder, Louise van der Merwe, arranged a lecture tour of South Africa by Phil Arkow, a world-renowned expert on the Link between Animal Cruelty and Human Violence. This helped to raise awareness of the importance of humane education in stemming the seeds of conflict and violence before these have taken root. A year later, HET was given the go-ahead by the ‘Safe Schools’ programme of the Western Cape Education Department to pilot a three-month humane education project in 11 schools that had been affected by violence.

The aim of the pilot study was to prove that humane education should be incorporated, as a vital component, in the national curriculum for schools – and it was monitored by a clinical psychologist attached to the Department of Correctional Services.

In his assessment of the pilot project, the psychologist said:

“I think people have lost their sense of connection. We have to leave the world in the hands of people who can care for this world and I cannot think of a better way to start doing this than through humane education.”

Eugene Daniels, the then head of the Western Cape’s Safe Schools Programme, said:

“Our Safe Schools Programme is not only about the elimination of crime and violence in the school environment, it’s about values. You can’t actually address crime and violence unless you look into the hearts and minds of people. In this respect, Humane Education can play a vital role.”

In 2002, the Humane Education Trust became part of the National Department of Education’s National Environmental Education Project (NEEP) programme. NEEP was initiated by the then Minister of Education, Kader Asmal, and aimed to develop resource materials to support environmental and humane education in the Foundation, Intermediate and Senior Phases of the National Curriculum. 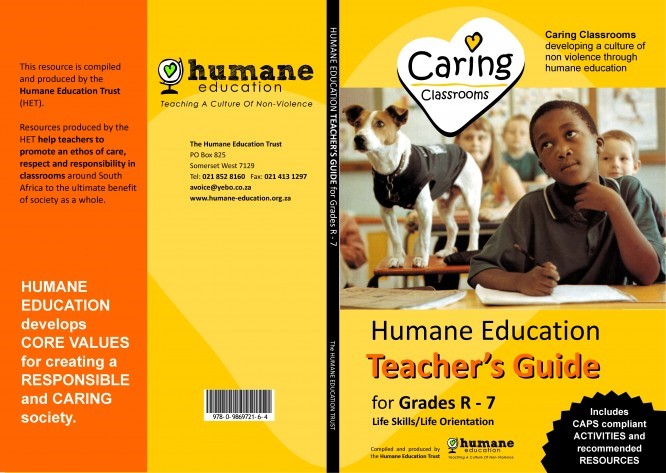 “Anyone who has ever worked on behalf of animal welfare is sure to be asked, sooner or later, ‘why are you so concerned about animals’ sufferings when there are so many humans living in wretchedness? And indeed there is some sense to this question as long as we see ourselves as being essentially separate and different from the natural environment and its kingdoms. But to think like that is to remain stuck in zero-sum thinking, where one thing can benefit only at the expense of another. And there is no need for us to stay trapped in this notion. We are not doomed to any either-or choice between treating animals better and treating humans better. We need to replace that zero-sum notion with the win-win realization that caring about humans and caring about animals are not mutually exclusive: they are two aspects of the same consciousness, and each one reinforces the other… How we treat animals and how we treat each other are two stems that grow from the same root. If there are thorns of neglect, contempt or cruelty on one, we can be sure to find them on the other. The essence of this new approach to the world is a spirit based on respect, and respect is indivisible… We urgently need to help our young people build a better future, a future founded on the very values that Humane Education aims to inculcate.”

In 2011, the final version of the new South African Curriculum Statements for Basic Education for Life Skills in both Foundation and Intermediate Phases, gives multiple allocations to animal care and protection.

Today, HET has a comprehensive selection of readers, documentaries and wall charts that promote the spirit of care and respect for all life. Their resources, many of which have HET is also a full member of the Publishers’ Association of South Africa.